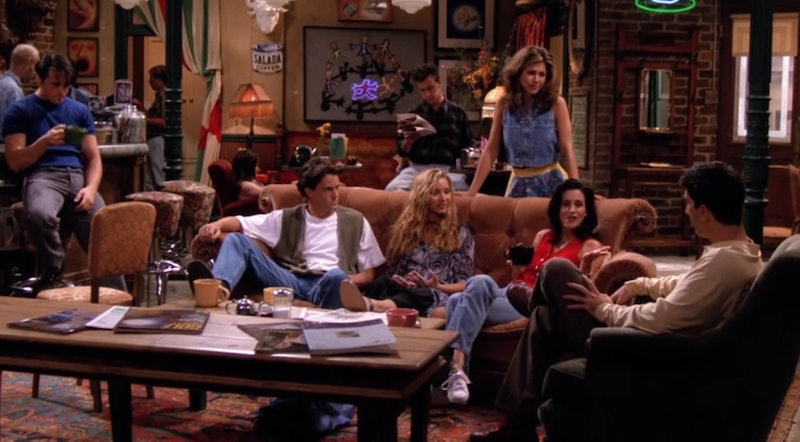 Oh Friends. What an amazing show. Doesn't it just take you away to a different place? Perching happily on a orange sofa in Central Perk. Where it's all coffee, bagels, yellow cabs. Well now we can experience all that magic here in the UK. It's a slight remix on the original, but yes a Friends themed café is coming to Manchester. The one where they went to Manchester. Literally.

As the Manchester Evening News reports, the café is being opened by the team over at Primark in their central Manchester location. The store on Market Street will have the pop up café from June 12 2019, and it will be opening in partnership with Warner Bros in celebration of the show's 25th anniversary, as Cosmopolitan reports. OMG can you believe that, 25 years?!

So I guess, as with most cafés, you will want to know what's on the menu. There will be a whole host of New York inspired drinks all served up in jumbo coffee mugs, the Manchester Evening News reports. And, if you feel keen on taking some merch home, there will be a bunch of limited edition branded products available to purchase in store. Products that will be exclusive to the store, so you had better grab some if you go. It would be rude not to am I right?

One of the more difficult things about running a café is keeping it kind to the environment. So, luckily for those concerned, the café will keep sustainability in min. The bosses of the business will be using compostable cups as well as ethically sourced coffee beans, the Manchester Evening News reports.

Primark, who are known for selling pretty cool merch, are understandably excited about the new venture. According to Metro, their director of new business development, Tim Kelly could barely contain his excitement:

"We are hugely excited to be bringing the first branded Central Perk Café in fashion retail in the UK to the British high street. Customers can relax and have fun there whilst also enjoying our amazing fashion at amazing prices in our Manchester store."

Manchester as a location for the café makes a lot of sense because it seems that they are absolutely Friends mad up there. They even have an actual convention.

Friends Fest is happening this August in Manchester's Heaton Park. From August 2-18 you can go to get the real Friends experience. Why not stop in town for a coffee at Central Perk en route? The convention features its own famous café and also some pretty impressive sets of Monica's place, Joey and Chandler's flat, and Ross' home as well.

The café, opening in mere weeks, isn't Primark's first themed establishment. When they opened their new flagship store in Birmingham (which is now the largest of all their stores), they opened a Disney café, Cosmopolitan reports. The cute AF place has Mickey and Minnie Mouse themed interiors and is a must see for any true Disney lovers. And what goes best with good interiors, why an entirely Disney-themed menu, of course! So you can save on trips to Disneyland and just fill up your (branded) cup in Birmingham.