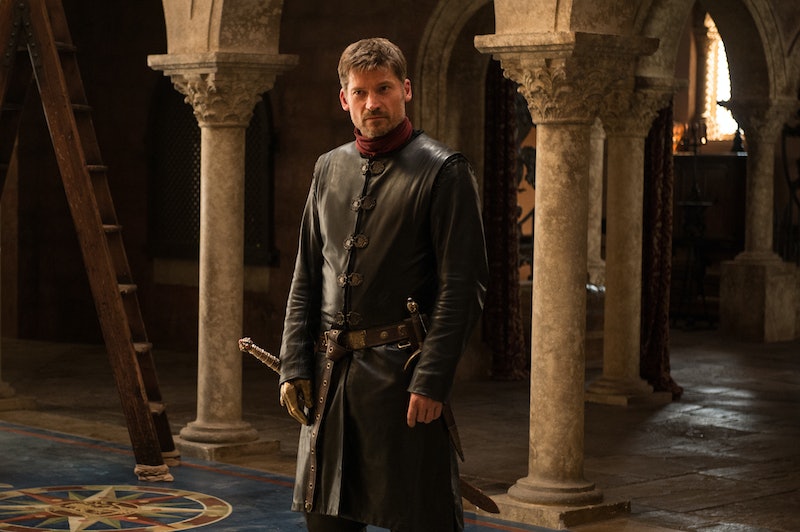 Both devotees and non-viewers of Game Of Thrones alike can agree on one thing: the world of GoT is complicated, yet thrilling. And a new Game Of Thrones background moment that’s gone viral on Twitter only makes life in Westeros all that more mystifying. Twitter user Kevin Biegel (@kbiegel) was watching the series premiere episode of Game Of Thrones and noticed a background character that feels a little too modern for the show.

In the brief clip of the scene posted on Twitter, an unknown man walks behind Jamie Lannister, wearing what appears to be a long Patagonia jacket, blue denim jeans, and short dark boots. In short, it's attire that contrasts greatly with the literal knight in shining armor that he walks behind. Considering that Game Of Thrones is supposed to take place in a period resembling medieval times, the mysterious background character’s choice of clothing is decidedly innovative for the time period.

Jeans as we know them today were not invented until 1871, a move that spawned a little company called Levi’s. Even Hermès, the oldest fashion house that still operates today, according to Designer Vintage, was in existence before Patagonia was founded over 100 years later. So if GoT is set in the olden days, long before denim would have been crafted, how did a normal civilian in Westeros get access to these modern luxuries literal centuries in advance?

GoT fans took to Twitter to respond to the odd discovery and poke fun at the uber-modern attire. User @couldntcarebear joked that the Levi's founder himself traveled back in time ("He’s Ser Levi of House Denim!," they exclaimed), while user @JimBehrle took aim at another modern clothing brand, suggesting he was "Ser L L Bean of Portland."

But user @dxferris had a totally different reaction, speculating about a twist that could appear during GoT's highly anticipated final season for all we know. "Spoiler for the big time travel twist," they suggested. And Twitter user @bobwerley jokingly attributed the fun mistake to HBO's seemingly low budget at the time.

The moment is a potentially hilarious gaffe that, if accurate, was apparently somehow overlooked by crew, cast, and fans since the show's premiere in April 2011. But, honestly, it's pretty impressive that it took this long for people to notice.

However, one of the biggest takeaway from this blooper is that the background character looks suspiciously like Marvel's Winter Soldier, aka Bucky Barnes. Instead of chalking this up to mere coincidence, fans are now (jokingly) buzzing about a crossover between Marvel and GoT — or speculating that the rumored time-travel in Avengers: Endgame went real awry.

One fact about GoT could explain why the character was wearing this modern-looking attire and why his choice of clothing was not a big concern for anyone involved. While the show does take place in pseudo-medieval times, it is still a fantasy world at the end of the day, and anything goes in a fantasy. That said, if this guy can wear jeans, can we see Sansa Stark in Chanel during the final season, please? Since anything goes, might as well have everyone step up their fashion game.