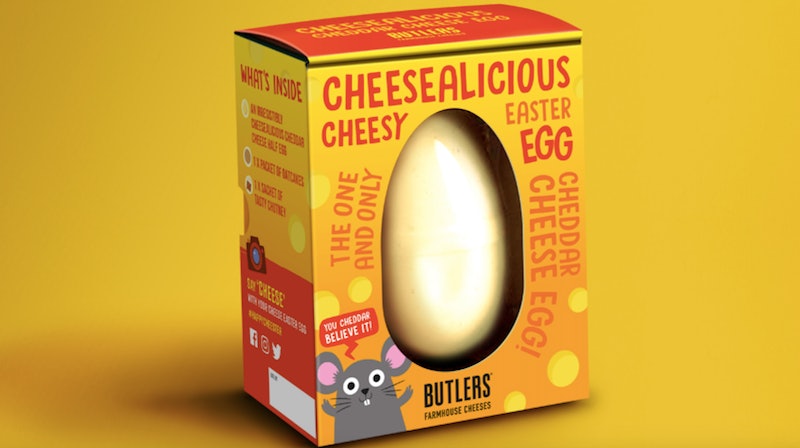 There is an age-old debate over the merits of two delicious foods: chocolate and cheese. Both, naturally, have their redeeming qualities, but whether one is truly ~better~ than the other really comes down to taste, at the end of the day. When holidays roll around, drugstores and supermarkets fill with sweets of every sort. So, those who preference something salty tend to get the shorter end of the stick ... until now. Sweet skeptics: rejoice! Just in time for Easter, you can now get an egg made out of English cheddar cheese.

It is almost Easter, which means a lot of egg-shaped items that aren't actually ovum are about to pop up everywhere. According to Pretty52, The Cheesealicious Easter Egg, available at Sainsbury's in the U.K., is made 100 percent from cheddar cheese, and ISN'T HOLLOW like some of its chocolate egg counterparts. According to the really cute package, the Cheesealicious Cheesy Easter Egg weighs in at 120 grams, which is roughly a quarter of a pound. So, you get a egg-shaped hunk of tasty cheese. Perfect, right?

Well, it gets even better. The only thing better than cheese is spreadable cheese. And not only is this cheese, spreadable, but it comes with a pack of oatcakes and a little package of chutney. It's the Easter appetizer you never knew you needed.

Emma Garvey is the the official Cheese Buyer for Sainsbury's, which is likely now your dream job. Per Pretty52, she said in regards to the egg, "We're always looking for new and unique products to offer to our customers, especially during gifting periods throughout the year when people are on the lookout for something special to give their loved ones ... The Cheesealicious Easter Egg seemed like an obvious and exciting choice to expand our Easter egg offering and cater to cheese aficionados nationwide. The egg is truly delicious and we can't wait to see the response from our customers."

The Cheesealicious egg is the work of the renowned cheesemakers at Butler's Farmhouse Cheeses. The family operation, in its fourth generation now, boasts itself on Twitter as the "Only dairy in [the] U.K. to create blue, soft & hard cheese under one roof." Some of the other kids of cheese it is known for include three distinct kinds of blue cheese, four soft cheeses like brie and goat, and six different firm cheeses.

But only one of the company's cheeses is fit for eating on Easter. Folks in the U.K. can pick one up at Sainsbury's beginning next month, on April 10, or online on the chain's website. Each sells for £5, which, in case you're wondering, is around $6.50 in the U.S. Though, alas, you cheese lovers outside of the U.K. may need to get a little more creative if you want to snack on a cheesy Easter egg. You can do a lot with a block of cheese, a paring knife, and some inspiration from across the pond.