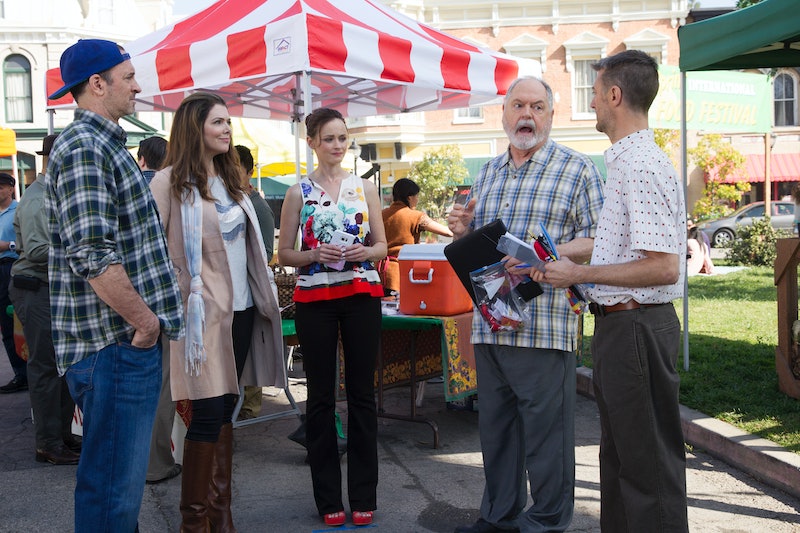 Listen, in this life, there are people who express their romantic feelings by writing poetry or cooking a candlelit meal And then, there are people who build a Gilmore Girls Lego play set for their other halves, and blow every other romantic gesture out the window. For context, it's worth mentioning that Lego allows users to submit ideas for new sets. And, according to HelloGiggles, one such spectacular user by the name of Rainer Zufall submitted an idea for a Gilmore Girls set, which has turned my heart to mush even worse than the time that Rory kissed Jess at Sookie's wedding.

Featuring an incredibly well-detailed Lego mock-up of Luke's Diner, as well as tiny Lego versions of Lorelai, Rory, Luke, Jess, Lane, and Kirk, the set is simply amazing. But it's not nearly as jaw-dropping as the reason behind its creation. Prepare for some swooning, because as explained on Zufall's Lego project idea page, this wonderful man built the Gilmore Girls set for his wife. He wrote,

The Idea of building Luke's Diner came to me, because my wife is a really big Gilmore Girls fan and she asked me to build Luke's Diner for her. So, since I am a big Lego fan I was glad to do this for her and – here it is.

Be still my caffeine-loaded, beating heart. And seriously, we need to unpack this whole thing like a kid on Christmas. Both literally (because, please make this happen, Lego) and figuratively. I'm just utterly blown away by every incredible, tiny detail.

For starters, there's the fact that the tiny Lego characters have an uncanny resemblance to their real-life counterparts — right down to Jess' half-smile and Kirk's bewildered perma-frown. Plus, you may notice the extra details given to each character. Rory, for example, has her books and a coffee mug, while Lorelai has what looks to be an extra large takeaway coffee cup and her trusty handbag.

But then, there's Luke's Diner itself, which has insanely specific details. For starters, there's the layout of the place, which is absolutely spot-on, including the decorating scheme, seats, and even the old-school cash register.

And when you look even closer and see the mugs all lined up behind the counter, you may notice the absolute Gilmore Girls pièce de résistance: Luke's iconic "No Cell Phones" sign, right where it belongs.

I'm completely in awe. Not just because of how phenomenal the set is, but also the romance behind it. I can tell you right now that my other half would never in a million years make this for me. So, massive props to this guy for being like Luke Danes and keeping love alive in 2017.

I also really, really want for this to happen, so that I can buy one and marvel at it in my own home. If you happen to feel the same, then you can head over to Zufall's page to add your support for the project, which needs 10,000 followers in order to be officially reviewed by Lego for approval. Let's hustle like Stars Hollow at a town meeting and make this dream a reality, people.