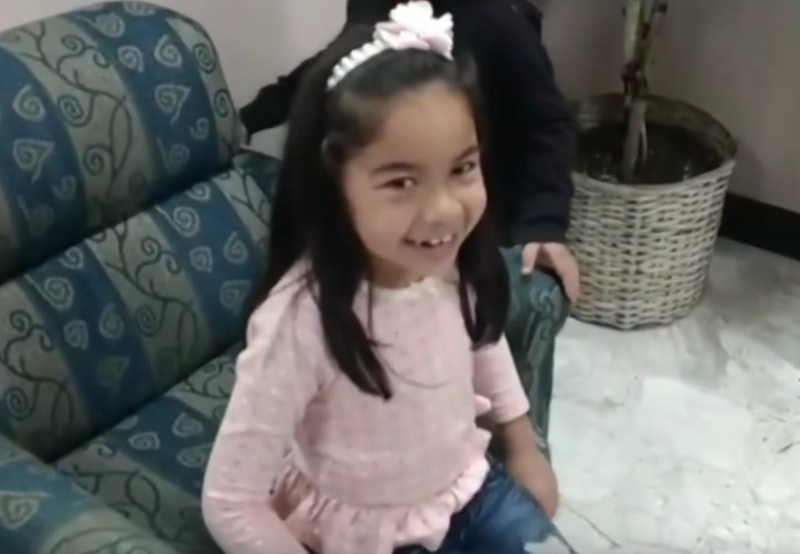 Dayami wanted slime, a dollhouse, and art supplies for the holidays, and she had a creative idea for how to get them. The 8-year-old girl sent her Christmas wish list up in a balloon, and it traveled all the way from her home in Mexico to Arizona, where a man found it and made her wishes come true.

Randy Heiss spotted the balloon caught in a bush while he was hiking in Patagonia near the U.S.-Mexico border. He noticed that the ripped latex remains also had a paper attached that included Dayami's name and a series of items. "My Spanish isn't very good, but I could see it was a Christmas list," he told The Washington Post.

Heiss immediately knew that he wanted to give the gifts to the young girl who'd wished for them. But unfortunately, the list didn't include any information about Dayami's whereabouts. "Well, how in the heck am I going to be able to figure out how to make contact with this little girl?" he asked himself, per KVOA.

His best guess was that the balloon came from the Mexican town of Nogales, which lies just across the border and is only 40 miles away from Patagonia. So he enlisted the help of a Nogales radio station, which posted a message looking for Dayami on its Facebook page. NBC reports that it took just an hour to find her.

So Heiss and his wife, who helped him translate the list, bought as many of the items on Dayami's list as possible. They also got presents for her 4-year-old sister, Ximena, whose existence they learned of through the radio station. The couple drove across the border and met their family at the station.

Upon entering the room, the couple said they were "ayudantes de Santa" — Santa's helpers — and delivered the gifts to the girls, whose "eyes were wide open with wonder," Heiss told the Post. "It gave me such healing joy ... seeing their little faces and everything light up," he told NBC.

Sending a message to the "North Pole" by balloon isn't an uncommon practice. It's a Latin American tradition, Mental Floss reports, and happens elsewhere, too. A Louisiana girl had her own Christmas wish list answered after sending it up in a balloon in 2016; the same thing happened to a girl in Seattle in 2011.

Heiss told the Post that he used to send up wish lists by balloon when he was a kid, too (though no one ever answered his). "The child let the balloon loose with faith that someone would find it," he told NBC of Dayami's list. "If you happen to find it, you don't turn away from an opportunity like that."

For Heiss and his wife, the gift exchange was particularly special because they don't have grandchildren to celebrate with (their only son died childless nine years ago). "Being around children at Christmastime has been absent in our lives," he told the Post. Giving presents to Dayami and Ximena, he said, was "a beautiful, beautiful experience" and "quite healing for us."