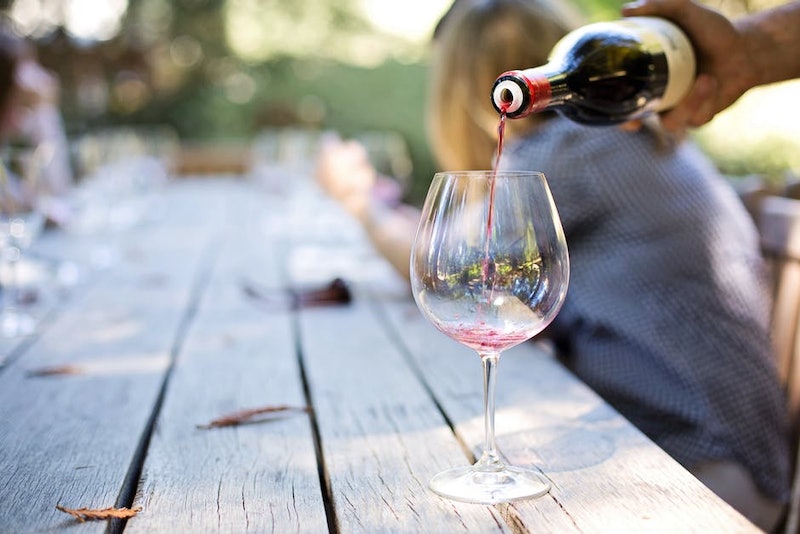 Fellow rosé lovers, I have dire news. After a poor grape harvest this season — thanks, global warming! — analysts have speculated that there will be a wine shortage in 2018 that could jack up prices significantly. I would warn you not to panic, but that's exactly what Twitter is doing at this very moment. Besides, if there's anything worth a touch of hysteria, it's the thought of getting through 2018 without a bottle of chardonnay clutched in your hand at all times. These are truly tough times.

On the off chance you don't closely follow agricultural news, the 2017 grape harvest has been less than ideal across the world. In fact, in Spain, Italy, and France, it is shaping up to be the worst in several decades. According to the European Commission, this year's regional harvest is likely to be the worst since 1982, and Europe's overall wine production is expected to drop 14 percent from last year. As analyst Stephen Rannekleiv explained to CNN Money, it's not as if a major wine producing country hasn't had a poor harvest before; the problem is that Spain, Italy, and France have all had an off year at the same time. Taken together, this spells disaster for wine lovers: Experts anticipate a shortage of wine, which would lead to higher prices.

As you can imagine, the Internet — which vacillates between Wine Mom and Vodka Aunt depending on its collective mood — has not taken this well.

Dozens of users are mourning the anticipated change in their drinking habits, usually with the appropriate number of horrified emojis and GIFs.

Honestly, I am right there with them. A world where I can't run to the grocery store in my pajamas for $4 pinot noir isn't the kind of world in which I want to live.

A few people, however, admitted that they might, ahem, bear some responsibility for the shortage. Others swore up and down that they totally had nothing to do with it. Nope. Never touched a drop in their lives.

According to CNN Money, Italy's wine production will fall by 21 percent, while production in Spain and France will decline by about 15 percent. In case you're wondering, the poor harvest appears to be the result of the extreme weather that pummeled vineyards this year. In the spring, France's wine country was hit with a spring freeze, forcing growers to warm their crops with heaters and candles. Vineyards in Italy escaped the low temperatures, but they were hit with a devastating drought this summer causing a decline in production. This year, apparently there was no way to win against Mother Nature.

You may have noticed that all this has to do with European wine production, but the harvest stateside isn't much better. Although the International Organization of Vine and Wine recently reported that the United States had a high level of grape production, the organization admitted that the analysis ended in August, so it didn't take the recent wildfires in California into account. In early October, the Weather Channel reported that at least six wineries in the state's famous Napa and Sonoma counties were largely destroyed in the fires, and "many others" were damaged. The good news is that most of the grapes were harvested before the fires; the bad news is that the remaining grapes may not survive well. The effect of the fires on the 2017 vintage has yet to be seen, but given how long recovery is expected to take in the area, it's probably... not great.

It's the kind of news that would drive a girl to drink. Might as well do it while the wine is still cheap, right?