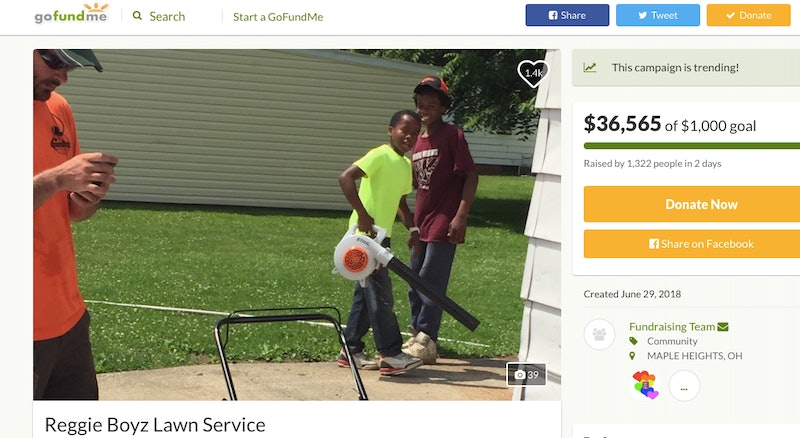 This is perhaps the truest form of grassroots fundraising. After news broke that police were called on a 12-year-old African-American boy for mowing the wrong lawn, a "Reggie Boyz Lawn Service" GoFundMe page to support of Reggie Fields and his entrepreneurial friends has raised more than $36,000.

Lucille Holt-Colden, a resident of Maple Heights, Ohio, told The Washington Post that she had hired Fields and a few of his friends to mow her lawn on June 23. As the group was finishing up their work, she noticed a police car roll up to the sidewalk, and soon found out the neighbors had called the authorities because Reggie had been clipping a section of grass that was just off of Holt-Colden's property, on the neighbors' side.

She posted a video to Facebook, explaining what had happened and expressing her frustration that police were being involved with such an innocuous act. "Who does that? Who does that?" she says in the video, captioned "This is RIDICULOUS!!!" Her reaction went viral, with more than half a million views since she posted it last week. She's the one who organized the GoFundMe for Reggie Boys Lawn Service.

According to Holt-Colden, her neighbors, who are white, have reported black children before for throwing snowballs. They did not want to appear on camera when News 5 Cleveland covered the story, and so far have not responded to press inquiry.

Fields' experience follows a recent string of events in which police have been called on black people — some even younger than fields — for, essentially, going about their lives. A few weeks ago in San Francisco, a white woman called the police on an 8-year-old black girl for selling $2 bottles of water without a permit outside her apartment building. The woman, Alison Ettel, was sharply criticized on Twitter and nicknamed "Permit Patty".

In May, another white woman named Jennifer Schulte called 911 on a group of black people having a barbecue at a park in Lake Merritt, near Oakland, California. Schulte was similarly slammed on Twitter and dubbed "BBQ Becky" for her actions.

Countless more occurrences of police involvement for what Twitter calls #LivingWhileBlack have sprung up in recent headlines — innocuous behavior including sitting in a Philadelphia Starbucks, napping in a student lounge, and going to the gym. In 2012, police even handcuffed a 6-year-old black girl who was having a tantrum in her school principle's office.

Over-policing of black people is not a new phenomenon, but one that has become more well-known with the advent of social media. “If the kids were white,” Holt-Colden says in her Facebook video, “they would not have called.”

According to CNN, the Maple Heights police just talked to the adults and did not cite or stop the children in any way. Fields' mother, Brandy told CNN her son has been getting lots of requests for his lawn-mowing services in the days following the incident.

"Some people are calling from out of town, saying, 'Can you come cut my grass?,'" she said.

In addition to GoFundMe contributions, people have donated lawn-mowing supplies to Fields' business, according to The Post. "People are inboxing me like, 'How can I get in touch with these children?', Holt-Colden said. 'Where are they at?' 'I got property I want these kids to cut.'"

Fields says the recent attention has made business more exciting, and that he plans to continue working to grow the enterprise. "Just give me a call. I will be there. On time!" he said in a short interview with News 5 Cleveland.

Perhaps apart from Holt-Colden's neighbors, the city of Maple Heights seems as encouraging as Fields' GoFundMe patrons in its response to his experience. In a press release on Sunday, Mayor Annette Blackwell called it a "very heartwarming story" and a "testament to the great children and generous people that live here."

"The City of Maple Heights is extremely proud of these young entrepreneurs!"