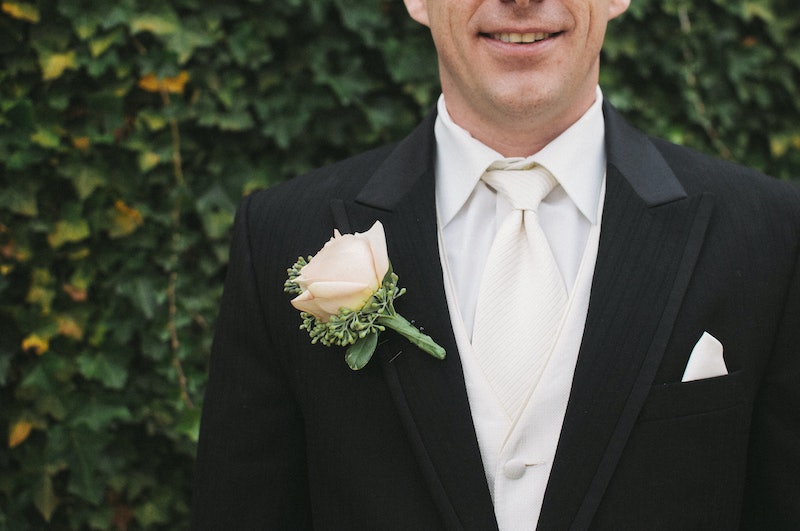 These days, it can sometimes feel like all news is bad news, and turning on the television or radio can seem like an act of masochism. But every once in a while, a small sliver of light shines through all of the darkness to remind us that there is good out there. This week, the good news came in the form of Clay Cook, a Canadian man who was in the middle of taking wedding photos with his wife, when he jumped in a river to save a small boy who had been pushed in the water by his friends.

According to the CBC, three kids had been following Clay and his wife, Brittany Ross Cook, around Victoria Park in the city of Kitchener, Ontario, while photographer Darren Hatt snapped pictures of the newly-married couple. While Hatt took solo pictures of Brittany, Clay stood to the side, and looking over his shoulder, noticed that one of the children was missing.

"They were by the river and looking into the river, so Clay headed over there to check it out and the kid was in the river and the kids were pointing at him like, 'He can't swim,'" Brittany told CBC. "Clay jumped down and said, 'Reach for my hand,' and the kid just reached and Clay was just able to grab him and pull him right out."

Darren Hatt, the wedding photographer, had an even more alarming account of the incident.

"The kid was under water on his back. He ingested water and there was mucous coming out of his nose," he told London's CTV News. "“It was scary. (The boy) was struggling. It could have gone unnoticed."

Brittany said she thought the children were between six and eight, and might not have realized what happened.

"They were playing — they thought it was a game, and the girl pushing him into the water," she explained. "I don't think they realized the severity of it."

An older girl reportedly came to collect the boy after he was pulled out of the water, but Brittany says they didn't meet any parents or adults accompanying the children.

Clay's heroics went viral after Hatt posted a picture of the rescue on his Facebook, with the caption: "A special shout out to last night's groom Clayton! While I was taking solo pictures of the bride this little guy was pushed into the river behind me by another child. By the time the bride noticed and shouted out, Clayton had already jumped down and brought him to safety. His quick action saved the little guy who was struggling to swim. Well done sir!"

The post quickly garnered over a thousand likes, and hundreds of comments from users who were moved by Clay's act of heroism.

"Saving a life on your wedding day, wow!! Congratulations!!" wrote one woman.

"A big hero. Too bad he is taken," another commented, echoing the thirsty thoughts of the thousands of people across the world who have been mentally casting Clay as the brave, strong protagonist in the private romcoms we all play in a loop in out heads while working out at the gym, or waiting in line for groceries.

As for the "hero husband" himself (as his wife admitted to calling him now,) he seems relatively unfazed by all of the attention.

"Clay's so humble to begin with that he didn't see it as a big deal. That's what everybody would do," Brittany said. "Clay said he didn't even think about it, he just jumped into action. The kid's in the water, what are you going to do? You're going to pull him out."