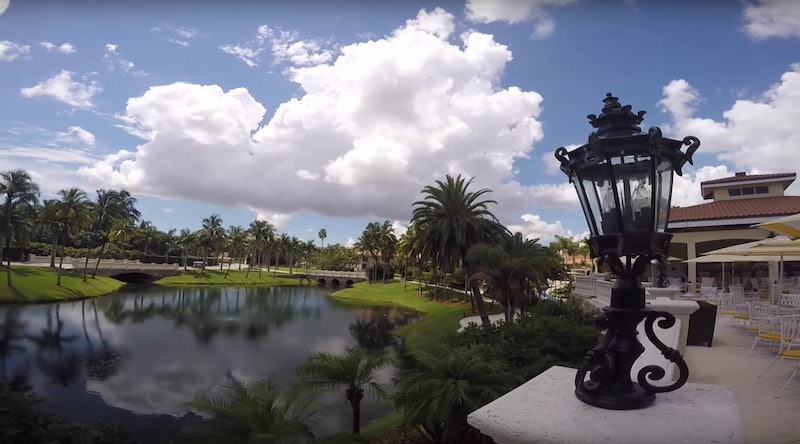 In the middle of the night on Thursday, a man entered the lobby of the Trump National Doral Miami and began "actively shooting," according to the Miami-Dade police department. Officers say they engaged in a shootout with the man at Trump's Florida golf resort. He was injured and has been taken into custody.

At a press conference on Friday morning, police said that the man — who has been identified as 42-year-old Dorsal resident Jonathan Oddi — removed an American flag from one of the resort's poles and entered the hotel lobby sometime shortly before 1:30 a.m. the night before. He laid the flag over the counter and began "yelling and spewing some information about President Trump," according to Juan Perez, director of the county police department. Perez also said that Oddi's words were "anti-Trump."

Oddi brandished a semiautomatic handgun, shot it into the lobby roof, and then waited for the police to arrive. CBS News reports that officers believe he was intentionally trying to bait them into coming to the hotel. A fire alarm was also activated before they got to the scene.

When police arrived, they immediately engaged Oddi and shot him in the lower body. He was taken into custody in under two minutes and sent to Kendall Regional Medical Center with several wounds. The police department stated early on Friday that his condition is currently "unknown."

One police officer was injured in the incident, but not from a gun, Good Morning America reports. The man broke his wrist and is in the hospital but in good condition, Police Chief Hernan Organvidez said on Friday.

Police do not think that Oddi was staying at the hotel. The Miami Herald reports that he's recently been renting a complex a few miles away from the resort. The paper found no previous arrest records in the county for Oddi, who appears to be from South Africa and works in real estate, fitness, and the gemstone business, according to his social media profiles.

Police say that Oddi's motive is currently unclear. "Right now, we're investigating this matter as a state crime," Perez said on Friday. "We're not saying that this is terrorism, we're not saying anything like that, but we’re not discounting anything at this point."

As a potential clue about his politics, The Miami Herald noted that Oddi once posted a meme criticizing Colin Kaepernick on Instagram. The image compares Kaepernick, who famously declined to stand during the NFL national anthem to protest police brutality, with U.S. soldier Glen Coffee, calling Coffee "the real hero." The meme was made by the conservative youth organization Turning Point USA.

Perez praised the police response to the incident: "These officers did not hesitate one second to engage this individual who was actively shooting in the lobby of the hotel," he said. "They risked their lives knowing that they had to get in there to save lives in that hotel."

Eric Trump, the third-eldest child of the president, tweeted out words of gratitude for law enforcement on Friday. "A huge thank you to the incredible men and women of the @DoralPolice Department and @MiamiDadePD," he wrote. "Every day they keep our community safe. We are very grateful to you!"

Police said that they intend to search Oddi's home and are currently seeking a warrant. The FBI has joined the case, and both Homeland Security and Secret Service officials were at the crime scene on Friday. The Secret Service put out a statement saying that none of its "protectees were in the Miami region at the time of the incident." President Trump is safe in D.C.