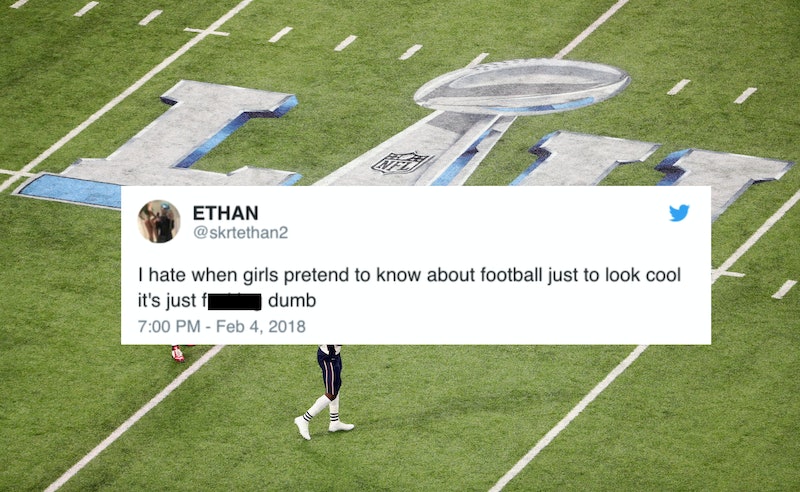 As I tuned in the Super Bowl on Sunday, unable to comprehend the ever-so-complex ways grown men tossed a ball back and forth on the field for no apparent reason, I wondered: Is it possible for women to truly understand football? The answer, obviously, is yes. This particular writer just thinks football is a little silly. But even though millions of women are football fans, they face the same problem as female comic book fans: Men who share their interest think women are only pretending to be into it for attention.

Case in point? A tweet posted during the Super Bowl by a Twitter user who calls himself "ETHAN," capital letters apparently necessary. "I hate when girls pretend to know about football just to look cool it's just fucking dumb," he wrote while live-tweeting the game.

This begs all kinds of questions. For one thing, years after Gone Girl smashed the "Cool Girl" stereotype to smithereens, does anyone really think liking football makes women cool? For another, why does some random guy on Twitter think he gets to decide what makes someone's interest genuine? Finally, does he actually know more about football than any of the "girls" he's criticizing?

When 19-year-old Alexander Romero came across the tweet in his timeline Sunday night, he set out to answer that last question with some good, old-fashioned trolling. He told BuzzFeed that he doesn't actually know Ethan in real life — Romero follows more than 67,000 people on Twitter — but the account's tweets had caught his eye before. When he saw the tweet about female football fans, he told BuzzFeed he cracked up because he has "seen people brag about knowing football, when in reality, they don't know as much as they say they do."

As Ethan continued tweeting about the Super Bowl (minus all the sexism this time), Romero decided to test his football knowledge. In response to one of Ethan's tweets calling the game "crazy," he replied, "Hell yeah did you see that touchdown by Gary Coleman?"

Judging from Ethan's response, he doesn't keep up with football or pop culture. "Yeah I was hyped he's too good," he tweeted. "The [Patriots] ain't winning this one."

In case you're as unenlightened as our friend Ethan, Gary Coleman was an actor who starred in Diff'rent Strokes as a child. You probably know him as the guy who popularized the catchphrase, "What'choo talkin' 'bout, Willis?" Not only did he never play professional football, but he also died in 2010 at the age of 42. Unless there was a hologram involved, Coleman was in no way part of the Super Bowl — but Ethan, presumably trying to look cool, tweeted the online equivalent of smiling and nodding at something he didn't understand.

Other people noticed the conversation, and soon, they had made the connection between Ethan's tweet about female football fans and Romero's question. Several users posted disappointed reaction GIFs starring Gary Coleman (natch).

And many just sat back and laughed.

When Romero posted screenshots of the conversation on his own account, it went viral. Nearly 168,000 people liked it, and the comments section exploded with people facepalming. "I don't know whether to laugh or cry," wrote one user.

BuzzFeed got in touch with Ethan, and for his part, he said he was "embarrassed at first" but eventually laughed at himself. He's also now aware of who Coleman was, so at least he learned something. Speaking of learning, in the future, let's hope lit teachers use this situation as a lesson in irony. Maybe, while they're at it, they can teach future generations to stop brushing off women's interests, too.