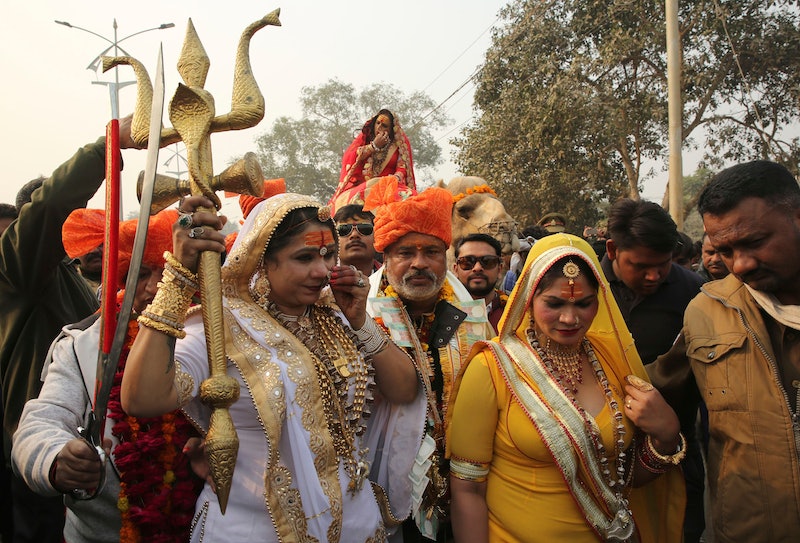 Traditionally, members from each of Hinduism's 13 Akharas, or congregations, mark their arrival to the religious Kumbh Mela festival with a vibrant procession through the city hosting the celebrations. Although not recognized as an official Akhara, a Hindu congregation of transgender people led a historic procession into Allahabad on Sunday. It was the second time they had led such a procession ahead of a Kumbh Mela festival.

A procession featuring members of the transgender congregation known as Kinnar Akhara were greeted by thousands of people eager to receive the sadhus' blessings in Allahabad on Sunday, the BBC has reported. Celebrated only once every few years, Kumbh Mela is considered to be the world's largest religious festival.

This year, the Akharas have begun to converge on Allahabad, a city in north India which lies at the junction of the Ganges, Yamuna, and mythical Saraswati rivers, for the two-month long festival. And according to the BBC, each Akhara traditionally marks their arrival to the festival with a spectacular procession, entering the city on decorated floats, horseback, or riding atop camels.

Formed roughly three years ago, according to The Times of India, the Kinnar Akhara congregation has been fighting since then to be officially recognized as an Akhara. "Transgender people have been mentioned throughout Hindu mythology," Kinnar Akhara member Atharv told the BBC. "You can't just wish us away. If there can be 13 Akharas for men and women, why not one for transgender people?"

While it was not the first time Kinnar Akhara has held such a procession, the one in into Allahabad was historically significant due to the city's size, prominence, and religious importance. According to both the BBC and Scroll, they held a similar procession in 2016 when they attended a Kumbh Mela festival in Ujjain.

"Leading the procession in Allahabad is special because it's one of the holiest cities in Hinduism and the Kumbh Mela here is more auspicious and larger than in any other place," Atharv told the BBC. Still, the young congregation told the news outlet that they spent two years fighting to get a space at this year's festival site.

"We respect the Akharas who oppose us," the BBC reported Atharv said. "I am sure that someday they will realize that Hinduism respects everyone, including transgender people."

But according to Atharv, Kinnar Akhara's current goal isn't to obtain official recognition as a Hindu Akhara. Rather they said the congregation would put its efforts into fighting to have their religious, spiritual, and social identities recognized by all.

In 2014, a landmark ruling from India's Supreme Court forced the government to legally recognized transgender as an official third gender. In 2018, the Supreme Court of India overturned an outdated law criminalizing gay sex.

On Sunday, Kinnar Akhara's leader, echoed a message similar to Atharv's. "We don't need certification from the 13 Akharas," Laxmi Narayan Tripathi told The Times of India. "We are Sanatani Hindus and are demi-gods as per the shastras. We are here despite efforts to keep us out."

More like this
New Coins Unveiled As King Charles III's Reign Gets Underway
By Sam Ramsden
An Honest Review of MeUndies Boxers, According To A Non-Binary Person
By Megan Lasher
Bimini, Tia Kofi & More React To Cherry Valentine’s Death
By Catharina Cheung
The 19 Best Tweets & Memes About Bisexual Awareness Week
By Lexi Inks
Get Even More From Bustle — Sign Up For The Newsletter