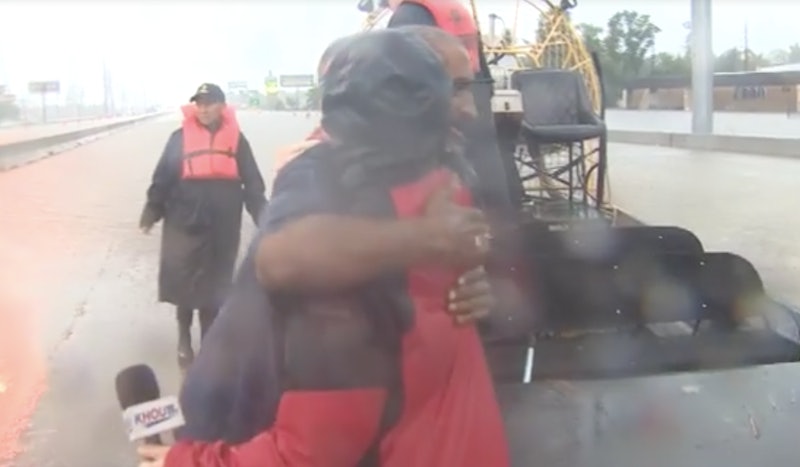 Massive tracts of Houston and southeast Texas are underwater Sunday, with millions of residents in danger as the extreme weather from Hurricane Harvey continues. Emergency responders have performed over 1,000 rescues across the city, and one person was saved from drowning in an especially dramatic fashion. A potential deadly situation was diverted by a quick thinking reporter who saved a man's life in Houston while live on television.

KHOU reporter Brandi Smith and her videographer Mario Sandoval caught the scene on video from the side of Beltway 8, one of Houston's major highways which makes a circle around the city. A truck driver was caught in extreme flooding on the feeder road (Houston's unique name for frontage roads next to the highway) and was trapped in the cab of his 18-wheeler right next to where Smith was filming. Smith was able to stop a Houston sheriff's truck as it was driving past and get them to the driver in time to save his life.

All this occurred while Smith was broadcasting live, narrating the rescue as she was performing it. When Smith flagged down the sheriff's truck, one of the passengers told her that a truck driver had died in the same spot during a flood last year. "Same location, 18-wheeler — he didn't know it was as deep as it was, but it was on the flipside of the freeway and we had to go dive for him because he passed away and went underwater," the unidentified man said.

The video of the reporter and the truck driver went viral on social media, both for Smith's heroism and as a potent example of the extent of the damage in Harvey's affected areas. Many people also used the video as an opportunity to attack Donald Trump, digging at the president's tendency to vilify the media — "As the Liar in Chief would say, the Media is enemy of the people...not so much."

The reporter talks to the man she helped save, who said he was appreciative of her and the Harris County Sheriff's Office, who brought the boat and got him out of the truck and back on land. The video ends with the reporter and the man hugging after the rescue.

The dramatic rescue didn't slow down the intrepid reporter, who stayed for a while at the site of the rescue, according to her Twitter feed. Smith and her team have continued to broadcast coverage of the damage in Houston, despite massive damage to their own studios. The KHOU offices have been evacuated due to flooding since Sunday morning, but the station has not stopped its coverage of Hurricane Harvey.