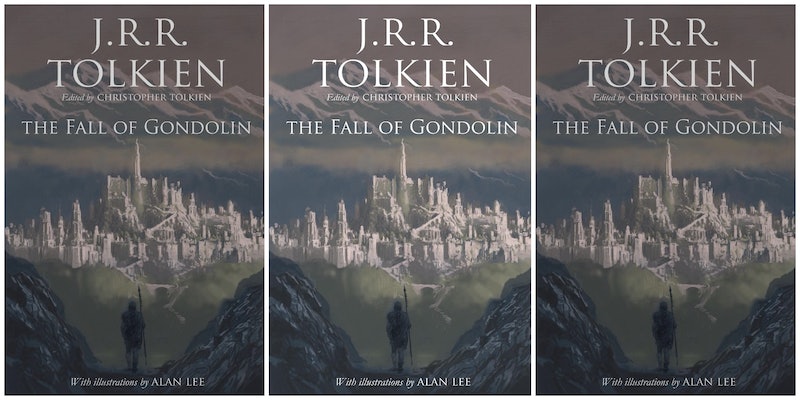 Nearly 50 years after his death, and J.R.R. Tolkien is still transporting readers to Middle-earth with new stories, films, television series, and, most recently, a new book. A fascinating story of a great and mysterious Elven kingdom that succumbs to the dark forces, The Fall of Gondolin is the final of author's "Great Tales" of the Elder Days, and it hits shelves in the U.S. and U.K. this August.

Edited by the author's son Christopher Tolkien and illustrated by Academy Award-winning artist Alan Lee, The Fall of Gondolin is what J.R.R. Tolkien considered "the first real story of this imaginary world" which would become Middle-earth. According to Tolkien scholar and author of Tolkien and the Great War John Garth, it was most likely written while the Lord of the Rings creator was in the hospital recovering after the Battle of Somme, and served as kind of dry run for his future novels.

Written in the same "history in sequence" mode Christopher Tolkien used in Beren and Lúthien, the second of three tales about the first Ages of Middle-earth, The Fall of Gondolin chronicles the rise of a glorious but hidden elven kingdom, and its eventual and utterly tragic fall. Like the very best of Tolkien's stories, it features a slew of magical beings, the breathtaking landscape of Middle-earth, unforgettable characters, including the utterly treacherous Morgoth and the heroic Ulmo, and an epic battle between good and evil you won't be able to look away from.

The Fall of Gondolin by J.R.R. Tolkien, edited by Christopher Tolkien, and illustrated by Alan Lee, $30, Amazon

The Fall of Gondolin is scheduled for publication in the U.S. and the U.K. in August 30, by Houghton Mifflin Harcourt and HarperCollins U.K. respectively. The upcoming book marks the first time The Fall of Gondolin will be published as a standalone novel, but it certainly isn't the first time fans of the high fantasy series have heard of its tale. The story was previously included in Tolkien's official history of Middle-earth, The Silmarillion, and is part of a connected trilogy of Middle-earth tales J.R.R. Tolkien deemed the Great Tales of the Elder Days that started with The Children of Húrin in 2007. When Christopher Tolkien released the second, Beren and Lúthien, in 2017 he declared it his "last book in the long series of editions of my father's writings." Needless to say, Tolkien fans were thrilled to learn that wouldn't be the case when they heard about the planned publication of The Fall of Gondolin.

In a statement about upcoming title, Tolkien Society chair Shaun Gunner expressed elation over what many readers consider to be a dream come true. "The Fall of Gondolin is, to many in the Tolkien community, the Holy Grail of Tolkien texts as one of Tolkien’s three Great Tales alongside The Children of Húrin and Beren and Lúthien," his statement read. "This beautiful story captures the rise and fall of a great Elven kingdom, taking place millennia before the events of The Lord of the Rings. This book brings all the existing work together in one place to present the story in full."

For loyal fans of J.R.R. Tolkien's work, The Fall of Gondolin is the one missing piece in an otherwise complete history of Middle-earth's early days. For both readers and fans of the films adaptations, it offers another opportunity to revisit one of the most beloved fantasy worlds of all time for one last adventure.

The Fall of Gondolin doesn't hit shelves in the U.K. and the U.S. August 30, but you can pre-order now.