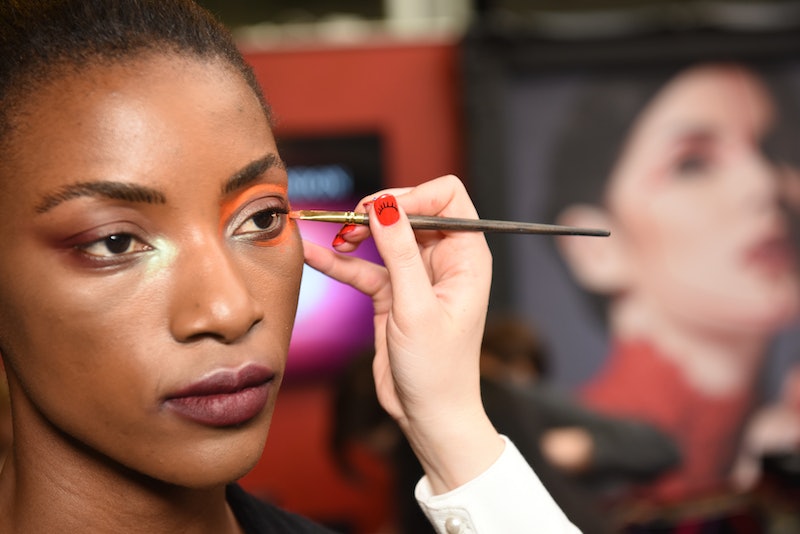 Stop what you're doing, because something epic is coming. According to Kat Von D's Instagram post, a Kat Von D Beauty brush line is coming and it's not your average tool kit. The brushes are vegan and cruelty free, so you don't have to choose between looking great and helping helping animals. You really can have it all. Here's everything you need to know before the big launch.

Brushes are nothing new to Kat Von D Beauty. The company has already created seven brushes so far. According to the website, all of them are cruelty-free. This time, it looks like something even bigger and better is coming. Kat Von D posted a photo of a secret product's packaging on Instagram, and the caption makes it clear that it's her new brushes. The packaging reads "vegan" and "fur-free artistry."

"I've teamed up with my #KvDArtistryCollective artists to create the most effective brush formations, using the highest grade synthetic fibers that mimic the same product distribution you would get from animal-based bristles," Kat Von D's Instagram caption reads. "We are living in amazing times right now where technology is making it so easy to make compassionate choices in the products we purchase, without having to exploit animals."

Unfortunately the caption doesn't give a release date or talk about which brushes to expect. It's still pretty darn exciting though. The photo does say that it will be an entire line of brushes. Think: everything from contour tools to eye and face brushes. It also says, "coming soon." Of course, there's no telling just how soon that will be.

Kat Von D Beauty has been working since the very beginning to come out with a completely vegan, cruelty-free beauty line. As of Aug. 5, almost every single product falls under those categories. There's even an entire section of the website that is devoted to showing people exactly which products are vegan.

Fingers crossed that this line is here sooner rather than later, because this is one feel-good brush line. Kat Von D Beauty deserves a big round-of-applause for constantly making products that go out of their way to stay true to their morals.