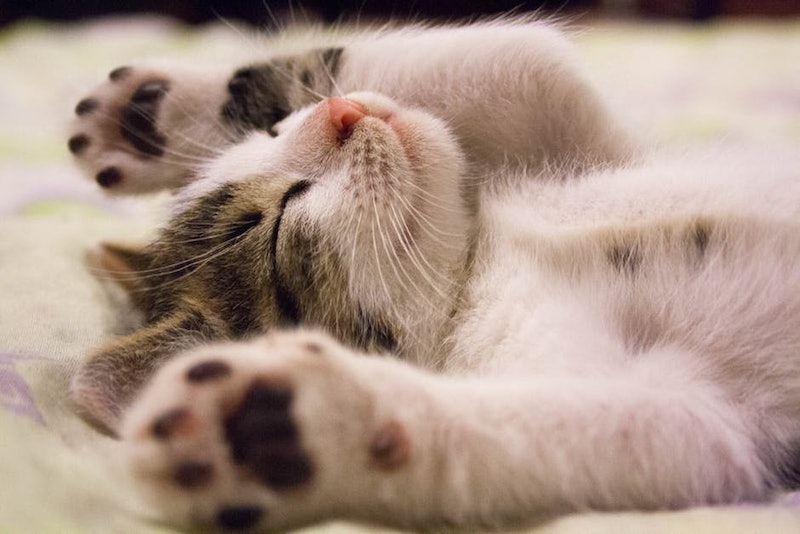 It's raining cats and dogs in Melbourne, Australia. Well, by "cats and dogs" I mean "cats," and by "cats" I mean "a single feral kitten who fell out of the ceiling and straight into the internet's heart." In a turn of events that sounds like it was ripped from the beginning of a children's novel, 28-year-old Elle Haywood and her new feline companion, Asbestos, met in an unusual situation. During a heavy rainstorm, the kitten crashed through her house's ceiling, and Haywood (naturally) decided to adopt him on the spot. If that's not evidence that fate exists, I don't know what is.

Haywood has made no secret of the fact that she and her housemates live in something of a fixer upper. In November, she tweeted that one of the legs of her bed punched a hole through the floor, and she told BuzzFeed appliances tend to break down "roughly once a week." When meteorologists predicted a heavy rainstorm in Melbourne last week, she braced herself for her house to spring more leaks than a colander.

"Secretly [very] stoked that this Intense Weather Event is gonna hit when I live in a house that has 5 indoor waterfalls whenever it even so much as sprinkles [with] rain," she tweeted shortly before the storm hit.

What she should have been bracing for, though, was a new houseguest. Haywood told BuzzFeed that first, she heard scratching in the wall, which she assumed was a possum. Not long afterward, she was in the laundry room when she heard an enormous crash from her bedroom.

The scratching wasn't a possum. It was a feral cat, which had fallen through the ceiling with a kitten (presumably her offspring) in tow. The cat streaked off immediately, but the kitten stuck around.

Not that he was particularly happy about it. Haywood told BuzzFeed that he had "clearly never seen people before," because at first, the kitten hissed and bit everyone in sight. Her roommates were woken up by the kerfuffle and an impromptu house meeting was held. Soon, they had decided to keep the kitten and name him Asbestos, a reference to the once-popular wall insulation material.

Although he was a fighter at first, Asbestos quickly settled into his new surroundings. I challenge you to watch this clip of his grooming routine and not melt into a puddle of enthusiastic goo.

Haywood ran him to the vet in the morning, and Asbestos checked out with a clean bill of health. The ceiling life might not be as rough as it seems.

With Haywood posting live updates to the situation on Twitter, everyone —and I mean everyone — fell head over heels for Asbestos. His Instagram account, Asbestos the Roof Cat, has more followers than yours truly. The video above has more than 15,000 views, and more than 4,000 people have retweeted the original photos of the kitten.

What's that? Time for a "look at his widdle mustachioed face" break? If you insist.

Believe it or not, this isn't the first time someone has been chosen by a roof cat. Several other users chimed in to say they had found their own cats when they crashed through the roof. One person even offered helpful advice, warning Haywood that other kittens might be hiding out in the floorboards and bushes. Who knew roof cats were so common?

Other users were merely excited to see the Ceiling Cat meme come to life.

In response to the many tweets asking her to check for other cats upstairs, Haywood tweeted that there were "at least two more with mum," but they were unable to get the kittens down because the ceiling was rotten.

To follow Asbestos's journey as he settles into the life of a household pet, complete with an adult cat to befriend, you can follow him on Instagram. To acquire your own roof cat, simply wait for the universe to answer your call.