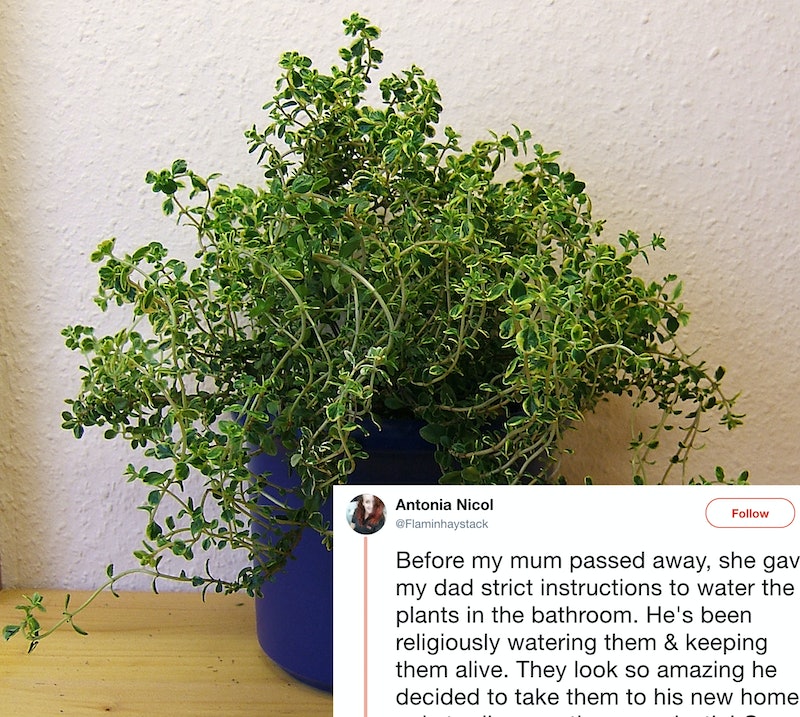 Levity and laughter are always necessary but especially in times of grieving. Antonia Nicol’s late mother must have known this to be true when she decided to play a prank on her husband that involved watering the plants. As it sounded like such a simple, straightforward request, Nicol and her father didn’t get the punchline after Nicol’s mother passed.

“Before my mum passed away, she gave my dad strict instructions to water the plants in the bathroom,” Nicola tweeted on Tuesday. “He's been religiously watering them & keeping them alive.” The plants looked so good that Nicola’s dad planned on taking them to his new house. That’s when fully understood the irony in his late wife’s request: the plants were plastic.

Nicol’s dad had been meticulously caring for fake plants, specifically at the request of his late wife. “Can hear my mum chuckling,” Nicol wrote.

The internet has had a good laugh as well with Nicol’s tweet currently having over 122K likes. The replies to her tweet are filled with equally people expressing their condolences and their love of Nicol’s story. If you feel like feeling good today, I suggest you read some of the stories people have shared in the thread, speaking about loved ones who left behind little vestiges of themselves before they left the world.

A lot of people were concerned about what happened to the water Nicol’s dad was pouring lovingly onto the plastic plants. Wouldn’t you notice if the pots were immediately dripping water every time you tended to them? “My poor dad thought the toilet seemed to be constantly leaking as there was always water on the bathroom floor after he'd tended to the plants,” Nicol tweeted.

A few people were still impressed by his faux-green thumb. “I would probably kill even a plastic plant,” one user replied.

Because the internet has gotten rightfully skeptical of any story that seems remotely good or nice, some Twitter users were quick to point out that the plant pictured in Nicol’s initial tweet can be found in a Google image search. While some thought that meant the story in its entirety was faked, Nicol clarified that she used an image she found on Google because she was unable to take a picture of the actual plant.

“My dad lives in South Africa and I couldn't get him to take a photo for me of the real thing,” Nicol responded. She also mentioned that he’d recently gone through an operation and was having a hard time walking.

Anyone who’s experienced grief knows there is nothing quite as cathartic as a good, hard, long-overdue laugh. The healing power of laughter hold water beyond just being a catchy cliche. Studies have shown that laughter help relieve stress and humor can help alleviate anxiety. Laughing improves our mood, and not just in the sense that laughter is the auditory embodiment of happiness. Our body experiences positive psychological and physiological responses to laughter, specifically in regards to the happy hormones laughing releases. Laughter also has also been linked to therapeutic benefits, even reducing physical pain.

Grief can be hard on your body in a very physical way. Not only does is affect the way you think and feel, some studies suggests it can negatively impact the immune system, even lead to physical heart problems. Those effects paired with the loss of sleep often associated with grief can do some real damage to your body.

Our mind and body are much more connected than we might think about on a day to day basis. Perhaps that’s why so many responated with Nicol’s story. “There's something deeply human about it too,” one user tweeted. “It's a weird and bonding experience,” Nicol responded. “That combination of joy and sadness.”