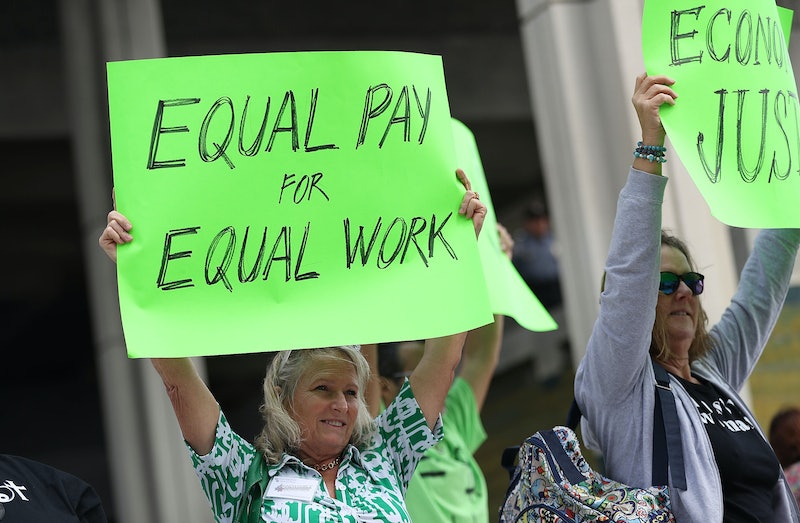 We may be beginning the fourth month of 2017, but women are still feeling the effects of paycheck unfairness from 2016. Today, April 4, is Equal Pay Day, the date that represents how many extra days women typically have to work into the current year to make what their male counterparts made by the end of last year. If you’re one of the many people wondering how we can close the gender wage gap, you’re not alone.

As the National Women's Law Center notes, women in the United States working full-time, year round are typically paid just 80 cents for every dollar paid to non-Hispanic white men, and the situation is even worse for some women of color.

Now, a 20-cent gap might seem like small change, but small change adds up over time. For a 20-year-old woman starting full-time, year round work today, that 20 cent gap translates to $418,800 less than her male counterpart over the course of a 40-year career. To close that gap, she’d have to work an extra ten years. Broken down by race, the lifetime wage gap is even more stark: for a Black woman, that lifetime wage gap adds up to $840,040. For a Native woman, it’s $934,240. For a Latina, it’s over $1 million. Left unchecked, that means Black and Native women would have to work well into their 80s, and Latinas into their 90s, in order to catch up to what white, non-Hispanic men are paid by age 60.

This has to change. Not only is the underlying sexism that fuels the wage gap morally indefensible, this kind of inequality is bad for families’ economic security, our economy, and overall quality of life as a society. It’s bad for families when nearly 42 percent of women are the sole or primary breadwinners in families with children and they are being underpaid. It's bad for business when half of consumers are underpaid, and can't afford to buy as much of what companies are selling. Fewer customers equals less money to pay for employees, and further down the spiral goes.

It doesn’t have to be this way. There are a number of solutions to close the gender wage gap, from better business practices, to employee education, to strengthening equal pay laws. Today and every day, we can all join the fight for equal pay by doing the following:

If you're involved with hiring new people or setting salaries in your workplace, here's something you can do to help close the gender wage gap right away: stop asking new hires for their salary history. Many employers don't think twice about asking applicants for their pay history during the hiring process, and using it to guide salary setting or negotiations. But for women and people of color, having a new boss ask for your old salary often results in past pay discrimination following us from job to job.

Any company or organization that is hiring already should have a clear understanding of the range it can afford to pay for the position based on its budget and the value of the job to the company, as well as what constitutes a competitive pay rate for the company’s location or industry. Companies don't need pay history to decide what to offer or counter-offer.

Common employer practices, like conducting private negotiations over pay and promotions, setting pay on a case-by-case basis, and keeping employees in the dark about each other's pay, also make it much harder for employees to spot discrimination.

You can't fix a problem you don't know about or understand. That's why some companies have begun conducting pay audits to see if they have company-wide gender pay gaps. Other companies have developed salary scales and ranges for positions (a common practice in many unionized workplaces). Some allow every employee to see the pay range for each position in the company, and other companies ensure that pay is set according clear, objective, consistent criteria like education and experience levels.

Fun fact: the wage gap is half as big for women in unionized jobs. If you’re a union member, get more involved and find out what it’s doing to promote equal pay. Unfortunately, most workers these days aren't represented by unions. But you can still educate yourself about your workplace rights.

Talk To Your Elected Officials

Thanks to advocates’ tireless work, local, state, and federal lawmakers have started introducing and passing laws to address the gender wage gap and pay discrimination. For example, U.S. Representative Rosa DeLauro (D-Conn.) and Senator Patty Murray (D-Wash.) are reintroducing the Paycheck Fairness Act today, which would strengthen the Equal Pay Act by stopping employers from punishing employees who discuss their pay with co-workers, and banning the use of salary history to set pay. Massachusetts became the first state to ban the use of salary history last year, and Philadelphia quickly followed. In the same vein, 15 states plus the District of Columbia have laws that prohibit employers from punishing employees for discussing their pay with their co-workers.

None of that progress would have happened without people getting informed, getting organized, and pressuring their representatives to introduce, support, and pass these bills. But your rights shouldn’t depend on where you happen to live. We need a lot more advocacy to win similar victories for our entire country. So get involved, if you're not already. Find out what’s happening in your state and work with local and state groups that advocate for workplace justice where you live. And join us at the National Women’s Law Center for national advocacy opportunities around workplace justice, reproductive justice, and much more.

More like this
How The City Healed Five Years On From The Manchester Arena Attack
By Ella Glover
Who Are The 6 Illuminati Heroes in 'Doctor Strange 2'?
By Grace Wehniainen
The 6 Best Couch Covers For Sectionals
By Masha Vapnitchnaia
Tapping Mind/Body Power: Evia Brings Digital Hypnotherapy To Menopause
By Cassandra Seale
Get Even More From Bustle — Sign Up For The Newsletter