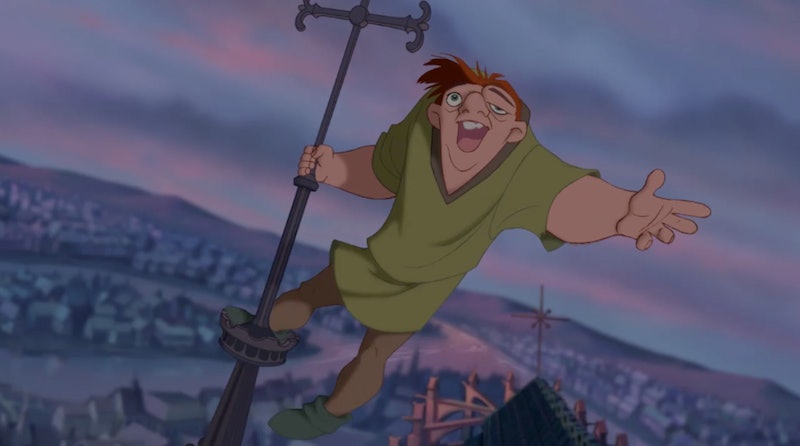 Disney is keeping the nostalgia alive with their roll-out of a whole bunch of live-action versions of their beloved animated films, and they're showing no signs of stopping. On Wednesday, Jan. 16, Disney announced a live-action Hunchback of Notre Dame is in the works, so get ready to be there with bells on.

The live-action Hunchback Of Notre Dame will be written by playwright David Henry Hwang, according to a report from Deadline. And the music will be written by the animated film's original composers, Alan Menken and Stephen Schwartz, who earned an Oscar nomination for their work on the film. As to the tone of the film, the live-action version will be based on both the 1996 animated original and Victor Hugo's 1831 novel, which means it will likely be much darker than the Disney original.

So who will play the titular Hunchback? According to Deadline, there are rumors that the role could go to Josh Gad, who is producing the film, played LeFou in the live-action Beauty and the Beast film and, of course, voiced Olaf the snowman from Frozen. However, Deadline's report was careful to point out that this is just a rumor, and the cast has yet to be announced.

That said, Disney still has plenty of time before it has to start worrying about casting. The live-action Hunchback will have to patiently wait its turn in Disney's long queue of live-action remakes. Upcoming in 2019 are Dumbo, Aladdin, The Lion King, and Lady and the Tramp, with Mulan following next year. So, odds are fans won't get a live action Hunchback of Notre Dame for a few years.

Still, Hunchback of Notre Dame is one of Disney's darkest animated films. So, fans will be invested in the casting no matter what. In fact, the dream casting online has already begun. EW's Dana Schwartz tweeted her pick for the Quasimodo role: Pitch Perfect breakout Ben Platt. Platt himself retweeted the announcement with a series of dead-shocked emojis, prompting fans to champion him for the role. "GIVE IT TO BEN PLEASE," wrote @bethanyclairee, "literally my sister and I were listening to the soundtrack and I said 'you know who could be a great Quasimodo?? @BenSPLATT. this is a sign."

So let the speculation begin: who will play Quasimodo? Both Gad and Platt seem like they could be a good fit, but the casting news probably won't come until this summer at Disney's D23 Expo in August — at the earliest. More importantly, who will play the freedom-fighting Esmeralda? In the animated feature she is voiced by Demi Moore, but Esmeralda is Romani (called "gypsies" in the film). And hopefully Disney has learned some casting lessons from the backlash regarding their casting of Naomi Scott (who is half Indian and half white) as Jasmine, a character who is Arabic, and will cast a Romani woman in the role.

Hunchback of Notre-Dame is another exciting Disney live-action remake to anticipate, though there's no release date so far. Stay tuned, and keep your bells tuned, too.