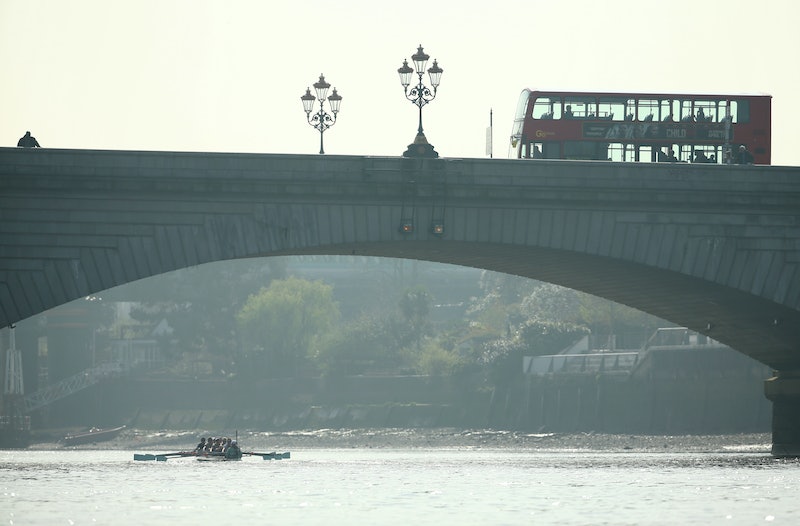 The incident of a male jogger shoving a female pedestrian off the pavement into an oncoming bus took place in May, but London police only released footage of it this week in a bid to aid their search for the man. The shocking video quickly went viral on Wednesday, and on Thursday, British media reported that the suspected Putney Bridge jogger has been arrested after getting a "huge response" from the public.

A 50-year-old man was arrested by police in the London neighborhood of Chelsea on suspicion of causing the woman grievous physical harm. Investigators have reportely taken the suspect to a south London police station where he remains in custody.

The footage showed the heart-stopping incident in which a male jogger appeared to be running in the opposite direction of a women on the pavement. The jogger first passed a male pedestrian without incident, and after that shoved the woman off the sidewalk. The video showed her falling on the road, narrowly missing an oncoming bus that swerved to the side at the last minute to avoid hitting her.

Later on, the Metropolitan police stated that the bus stopped and passengers came out to check the woman's safety. A hunt for the jogger began shortly after the incident, but the police had few leads.

Perhaps the most unsettling detail from the incident, according to Sgt. Mat Knowles, was that the woman had tried to approach him later on his return route, and he simply ran past her:

After he pushed her, he ran across the bridge and 15 minutes later came back. By this time the members of the public who had helped the woman were gone and she tried to talk to him as he ran past her but he just ignored her.

Although it is not clear whether users on the internet were pivotal in finding the suspect, public outrage and condemnation of the incident were abundant. One person tweeted that "the country had come together to hunt down the Putney Bridge jogger." According to The Independent, the suspect was arrested after police made a call to an address in Chelsea; earlier, the Metropolitan police said that it received a "good response."

With the news of the arrest of the suspected jogger, hundreds of users on Twitter from the United Kingdom congratulated the police. "Good, I hope he is prosecuted to the full extent of the law," one Twitter user wrote.