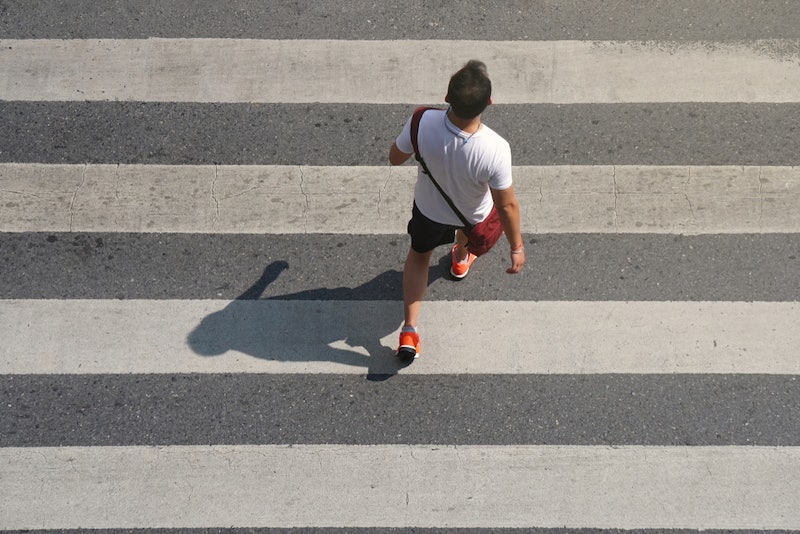 There may soon be a new option when it comes to birth control. A male birth control gel has started its clinical trial, Gizmodo reports, which means men might finally have a legit birth control option beyond condoms and vasectomies. The trial is funded by the National Institute of Child Health and Development (NICHD) and plans to enroll 420 couples in seven countries across the globe, including the United States, according to Gizmodo.

The male contraceptive gel is a combination of Nestorone, a progestin hormone, and testosterone, according to Gizmodo, that's rubbed on the shoulders daily. The progestin in the gel lowers sperm count until the men become infertile, says NBC, but progestin also causes testosterone levels to drop. When testosterone levels drop, that can lead to side effects, such as acne, weight gain, and a lowered sex drive. That's why the gel also needs to contain a certain level of testosterone. The researchers are testing to make sure the effects of the gel are reversible and that the level of testosterone in the gel keeps the participants from experiencing any wanted side effects.

“Many women cannot use hormonal contraception, and male contraceptive methods are limited to vasectomy and condoms,” Diana Blithe, study investigator and chief of NICHD’s Contraceptive Development Program, said in a news release about the trial. “A safe, highly effective and reversible method of male contraception would fill an important public health need.”

Although condoms are easily accessible — you can even get condoms for free at many community health centers — and they’re about 85 percent effective against preventing pregnancy, according to Planned Parenthood, many people don’t like using them. The Centers for Disease Control and Prevention (CDC) says only 24 percent of women and 34 percent of men ages 15 to 44 used a condom the last time they had sex.

And, as Blithe stated, not all women can take hormonal birth control for a variety of reasons. Past efforts to create a male contraceptive option were put on hold because the male clinical trial participants reportedly complained of side effects, such as acne and depression, according to NPR. But some female-bodied people face significant health risks with taking birth control, such as the risk of blood clots, cancer, heart attack, stroke, high blood pressure, migraines, tumors, and even death, according to Planned Parenthood. Despite these risks, which are different person to person, the CDC says more than 10 million women in the United States use the birth control pill to prevent pregnancy.

The clinical trial is expected to be completed in 2022, but since it’s only a phase 2b clinical trial, it’ll take more studies before the Food and Drug Administration and other regulatory agencies will approve it, Gizmodo reports.

Culturally, the onus has been on women to figure out how to prevent pregnancies, but if a male contraceptive gel is released to the public, then men may be able to share this responsibility. "Any time we can potentially offer couples more options for contraception is a small victory in reproductive health," Dr. Jennifer Ashton, ABC News chief medical correspondent and a practicing OB/GYN in Englewood, New Jersey, told ABC News.