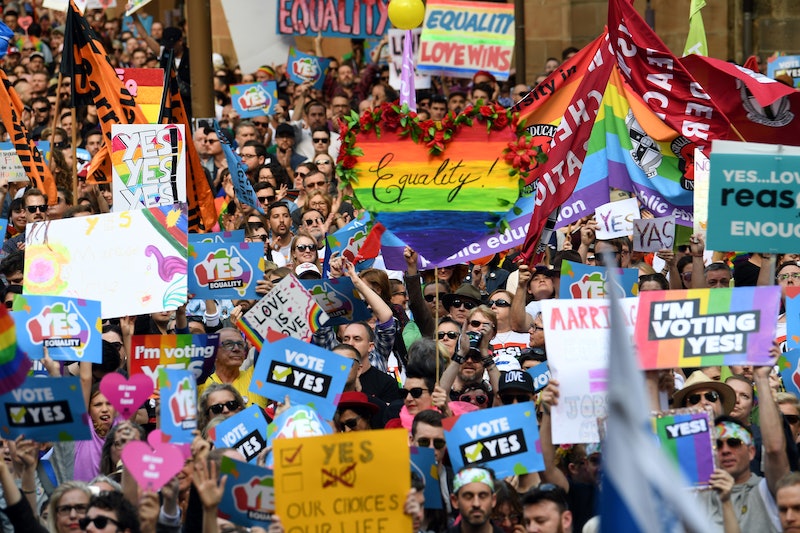 The past couple months have been tumultuous for Australia's LGBT rights advocates, to say the very least. While Australian activists have been fighting hard for marriage equality as the country kicks off its non-binding plebiscite this month, a dog named Mack allegedly just became the latest victim of homophobic verbal abuse while out on a walk. On Sept. 26, Mack’s owner, journalist Claire Sutherland, posted an adorable picture of the pup wearing in a blue bandana with a picture of rainbow-colored Australian states, and the word “equality.” Sutherland’s accompanying caption, however, was not nearly as cute as Mack: “So some mouth-breathing cretin in the park tried to kick my dog while shouting homophobic slurs. Australia you have truly sh*t the bed,” she wrote. Yes, you read that right. Mack, a dog, was reportedly nearly attacked for wearing a pro-marriage equality scarf.

After her initial post on Twitter, Sutherland wrote an article on the Herald Sun detailing the encounter with the random homophobic man. Sutherland’s dog sitter had taken Mack on a casual, off-leash walk in a dog park when the dog approached a random man at the park. The man allegedly tried to kick Mack, and thankfully completely missed the pup. However, the man began to shout homophobic slurs directed towards Mack’s dog sitter, saying she was “a degenerate and dangerous.” Though Sutherland wasn’t present at the time of the incident, she was obviously shaken that someone would verbally assault Mack and his sitter simply because the dog was sporting a pro-marriage equality bandana.

While this news may feel a bit strange, it is a direct consequence of the homophobia that pervades Australian society, with tensions related to the postal vote on the rise. In August, Australian Prime Minister Malcolm Turnbull announced the country would participate in a voluntary plebiscite (a vote that does not legally alter law) to gather public opinion on the legalization of same-sex marriage. Australia’s plebiscite was sent out to all registered voters on Sept. 12, and simply asked the yes or no question: "Should the law be changed to allow same-sex couples to marry?"

Though a 2013 Pew Research Center survey revealed 79 percent of Australians believe homosexuality should be accepted in society, gay marriage still remains illegal and vehemently contested. Tasmania became the last Australian state to decriminalize being gay in 1997, while the Sex Discrimination Act of 1984 was also amended in 2013 to further protect Australia’s LGBTI community from discrimination. (LGBTI, with "I" standing for intersex, is commonly used in Australia, rather than LGBT or LGBTQ as is common in the U.S.)

Australia has made strides towards equality, but homophobia is still present in Australian society. The Australian Human Rights Commission gathered a 2014 report called “Face The Facts” to detail the discrimination LGBTI people in Australia face. The report found around 61 percent of LGBTI Australians experience homophobic verbal abuse, while another 18 percent reported experiencing physical abuse due to homophobia. Additionally, the report found almost half of all Australia’s LGBTI population publicly hide their orientation or gender identity due to fear of violence and discrimination.

The plebiscite results will be released on November 15, and most polls show majority of Australians are in favor of same-sex marriage. However, a recent poll has shown the opposition (aka, those who don’t support gay marriage) has risen from 30 to 34 percent in the past month since Prime Minister Turnbull’s announcement. So, while the attack on poor little Mack and his marriage equality bandana is awful, it is not surprising. In her Herald Sun article, Sutherland asks, “Australia, have we really reached the ‘shouting at dogs’ stage of the marriage equality debate[?] How did we get here?” If anything, Mack and his owner’s story is proof that Australia’s fight for LGBTI marriage equality will not be without a setbacks along the way. Hopefully, Australians will stand with their LGBTI community, and the animals that support them, too.