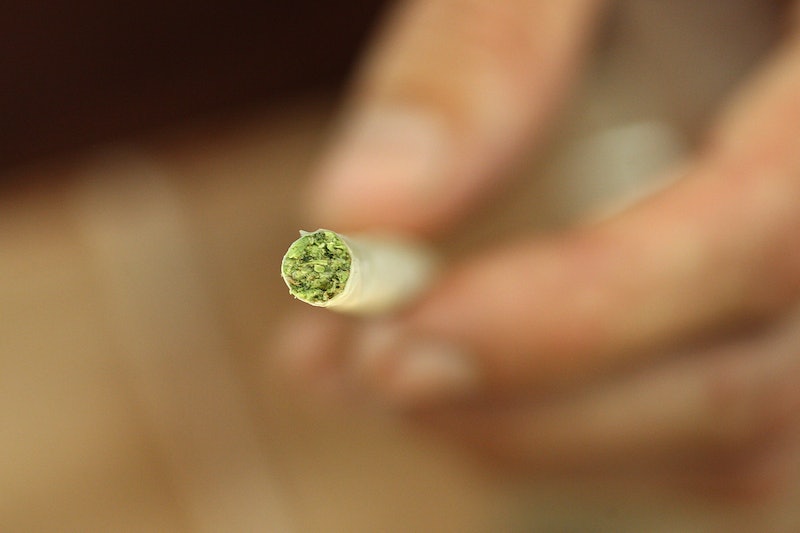 You can get pretty much anything these days without getting out of your car. Since the 1950s, drive-thrus have evolved from offering just food to prescriptions, booze, and now marijuana. That's right, a marijuana drive-thru just opened in Las Vegas, so now you can pick up your pot just like you get your In-N-Out Burger — handed to you through a window. The Las Vegas Sun reported that Nuwu Cannabis Marketplace, located on tribal land near downtown Las Vegas, opened a drive-thru service Nov. 10, and will serve up as many as 15 popular recreational flower, edible, and concentrate products.

While the service was initiated to make it more convenient for elderly and disabled customers to get marijuana products, the first-of-its kind drive-thru is a symbol of how far the U.S. has come in its acceptance of cannabis as an acceptable recreational and therapeutic plant versus a dangerous drug. "We want all customers to have that same experience of being able to get in and get out,” Benny Tso, chairman of the Las Vegas Paiute Tribe, told the Las Vegas Sun. "It’s about speed and convenience."

Cannabis and hemp products are increasingly making their way into ordinary people's everyday lives. California-based marijuana-product delivery service company Eaze tells Bustle in an email that the there was a 30 percent increase for orders on Halloween 2017 compared to 2016. Eaze also reported that women are using cannabis products more than men, those who work in the tech industry reported a higher usage than people in other industries, and 50 percent of parents surveyed reported replacing cannabis with drinking. And, just like every other company in the U.S., Eaze offers a pumpkin spice blend because, you've got to give the people what they want.

Drive-Thru Marijuana Service With A Smile

According to the Sun, workers are being hired away from fast-food restaurants to offer drive-thru marijuana service with a smile, and are tasked with getting the order into customers' hands in less than a minute. And, what makes this drive-thru unique is that it's not just for medicinal use. Kevin Clock, president of Cascade Strategic Investments who partners with Nuwu, told the Sun, "the new drive-thru is the first fast food-style drive-thru for recreational marijuana in the country."

So far, eight states and the District of Columbia have legalized recreational marijuana, according to Business Insider. Voters opted to legalize recreational marijuana in Nevada in 2016, and it had been legal for medicinal purposes since 1998. CNBC reported that scientists now agree that marijuana is safer than both alcohol and tobacco, according to a 2015 study from Scientific Reports.

CNBC reported that "most experts say there has never been a documented overdose death from marijuana use in someone without an underlying condition." However, that didn't stop the U.S. Drug Enforcement Administration from ranking marijuana as a schedule 1 drug for decades, which is the most dangerous ranking and comes with the stiffest penalties for those caught using by police. With more and more states decriminalizing marijuana, the country is seeing a sea change in how society views cannabis. And, the fact that you can now get it at the drive-thru is just the latest example.

As Long As We're Talking About The Drive-Thru...

The concept of a marijuana drive-thru brings to mind, for many people, the question of how close the dispensary is to an actual fast food drive-thru. Though driving while high is terrible idea, many people will likely be following up their recreational dispensary trip with a visit to the closest Taco Bell. There's actually as actually a scientific reason behind why smoking pot makes you hungry.

"By observing how the appetite center of the brain responds to marijuana, we were able to see what drives the hunger brought about by cannabis and how that same mechanism that normally turns off feeding becomes a driver of eating," Tamas Horvath, director of the Yale Program in Cell Signaling and Neurobiology of Metabolism, and lead author of a 2015 study on why marijuana induces hunger, said on the Yale News website.

Basically, marijuana overrides the brains feelings of being full and tells the brain that you're hungry instead. This is why marijuana is such a successful appetite stimulate for cancer patients. "It’s like pressing a car’s brakes and accelerating instead, Horvath explained. "We were surprised to find that the neurons we thought were responsible for shutting down eating, were suddenly being activated and promoting hunger, even when you are full. It fools the brain’s central feeding system."

Until that whole drive-thru restaurant/marijuana dispensary becomes a reality, you'll just have to settle for going to two places. But, one thing's for sure: the drive-thru marijuana shop could totally change your next trip to Vegas.