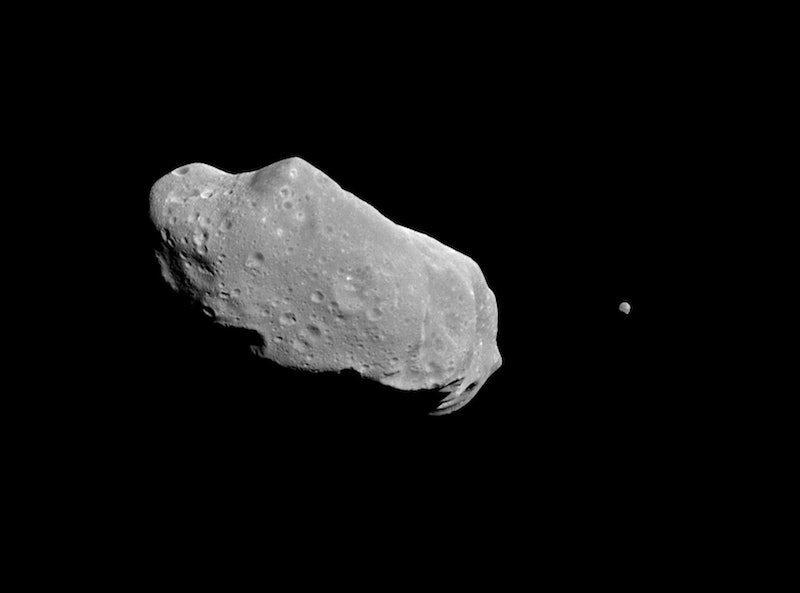 Not to disturb the "new year, new you" zen that you're probably flying high on, but there's a little... uh, situation brewing in space right now. Apparently, a massive asteroid is going to pass super close to Earth on Jan. 2 at 7:40 p.m. ET, somewhere in the neighborhood of 1,300,000 miles from the planet we call home (according to NASA, an asteroid is considered "hazardous" when it's within 4,650,000 miles of Earth). I know that sounds dire, but don't quit your resolutions before they even begin — we won't exactly be living the plot line of the classic 1998 disaster flick Armageddon just because an asteroid — which, according to NASA's Jet Propulsion Laboratory in California, has been dubbed 2017 YD7 — is passing close to Earth. Sorry if I'm crushing your chance to be Liv Tyler dreams. There are mile wide rocks hurling past Earth regularly — the only reason this is making headlines is because this particular asteroid is just passing closer than normal.

I know it's tempting to respond to this news by changing your new years goal from "being more organized" to "gluing oneself to the NASA blog." I know that personally, between all my menial stresses on Earth (like not being able to book a gynecologist appointment that's not at least 3 months away, what is that), hearing that a ginormous asteroid is threatening Earth and all life on it offers an appreciated dose of perspective. There's a lot going on outside of our computers. It's important to remember that so we can appreciate the little things in life, like the time spent away from windowless waiting rooms in doctor's offices. In those terms, this reported near-miss asteroid is kind of a win-win for us Earthlings. Besides avoiding an unpleasant impact days into a new year, we also get a refreshing positive outlook on the 363 days left in 2018.

According to the Daily Mail, the asteroid that is juuust missing us will, "travel past at around 1,300,000 miles (2,000,000km) away — which is relatively close in space terms." You might use "1,000,000 miles" as a way to exaggerate and emphasize how far away the restaurant is from your house when it's cold outside and you have to walk, but, apparently it's a minuscule distance. NASA defines "Potentially Hazardous Asteroids (PHAs)" based on "parameters that measure the asteroid's potential to make threatening close approaches to the Earth." Anything closer than 4,650,000 miles is considered a threat, so this latest zooming space mass is a little too close for comfort (if you ask me, a mere Earthling who doesn't own a telescope).

And speaking of zooming, the speed at which this asteroid is reported to fly by Earth at is "five times faster than the world's quickest manned aircraft — the hypersonic North American X-15, which travelled at 4,520mph (7,300kmh)," as reported by the Daily Mail. So how fast will it be hurtling towards (and past) Earth, exactly? 23,500 miles per hour. While not exactly the speed of light, that's still a speed at which I can not even fathom. I'm the girl who decided to sled down the mountain instead when learning how to snowboard because the sheer velocity of human on mountain slope seemed unnatural.

AstroWatch, my new favorite blog, reports that the asteroid is "truck-sized" and "is expected to pass by Earth on Wednesday, Jan. 3 at 0:40 UTC." This time translates to 7:40 p.m. on Jan. 2 in EST. But, as I said, there's no need to breath into a paper bag to settle anxiety before the clock strikes 7:40 pm: According to AstroWatch, "On January 1, there were 1,872 Potentially Hazardous Asteroids (PHAs) detected, however none of them is on a collision course with our planet." See, there are just ginormous masses whizzing around us but none that pose a threat to our planet.

Go forth with your new years goals if you made them, and don't let a giant asteroid stop you from living your best life. On the contrary, let its presence motivate you to cherish every single day of 2018, making the most of all the things we typically take for granted here on Earth. This asteroid is zooming past us as we zoom into a new year full of opportunity and zero asteroid collisions.

More like this
How To See The Lunar Eclipse On May 15-16, 2022
By Kaitlyn Wylde
Rihanna & A$AP Rocky’s Astrological Compatibility Proves They'll Be Amazing Parents
By Nina Kahn
5 Crystals For Anxiety
By Megan McCarty
5 Crystals To Manifest Better Sleep
By Megan McCarty
Get Even More From Bustle — Sign Up For The Newsletter