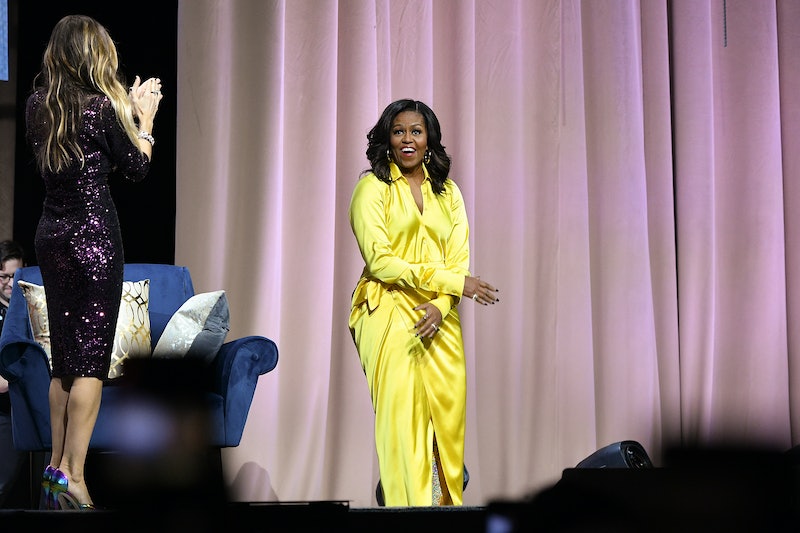 What students learn in their classrooms not only influences their academic performance, it also shapes how they go about their lives beyond their schools. Considering the generous praise it's received so far, it's no surprise then that former first lady Michelle Obama's memoir Becoming will be part of a class curriculum for young black girls in the country.

One of the people inspired by Obama's memoir said that she was working on introducing Becoming to black girls for their learning and development. In late December, Lauren Christine Mims, who was previously the assistant director of White House Initiative on Educational Excellence for African Americans, told Black Enterprise about her plans to bring Becoming to young African-American readers.

"Reading Becoming was like sitting on the couch with your best friend and having one of those soulful conversations about life," Mims said. "Reading about how Michelle Obama felt unchallenged in elementary school, teased for the way she spoke, and noticed a difference in how she was perceived during adolescence was affirming."

Mims, who is pursuing a Ph.D. in educational psychology at the University of Virginia, studies what it is like to be young and black in a country where racism against African-Americans often has fatal consequences.

Mims told Black Enterprise that Becoming could be helpful for young black girls in forming their identity and productively facing social challenges in an often hostile world.

She discussed her own research with Black Enterprise. "I disrupt the traditional practice of talking about black girls in pejorative ways and center them and their unique experiences to study how we can support them. For example, my research highlights what 'Black Girl Magic' means to black girls; the role teachers play in supporting or stopping the success of black girls; and more about what they are learning and how it makes them feel," Mims said.

As is evident, Mims is picking a popular book for the purpose of helping black girls and Obama's memoir is a hit so far. According to its publisher, Penguin Random House, Becoming sold more than 2 million copies in North America in the first two weeks of its release. The former first lady's book tour covered at least 10 cities in the United States alone. And it's attracted a global audience as well, with Obama touring in the United Kingdom and Canada.

Perhaps it is Becoming's frank and straightforward tone about complex issues that has won the hearts of many readers. At various points in her book, Obama wrote about the myriad of troubles she faced as a youth and how later on people viewed her as an "angry black woman."

But the former first lady is unmistakably clear about the power and necessity of hope. In Becoming, Obama wrote, "For me, becoming isn’t about arriving somewhere or achieving a certain aim. I see it instead as forward motion, a means of evolving, a way to reach continuously toward a better self. The journey doesn’t end." It's that kind of unwavering resolution that Mims seems determined to relay to young black girls in America.

More like this
Michelle Obama & Taylor Swift React To The Supreme Court Overturning Roe v. Wade
By K.W. Colyard
Every Single Big & Small Way You Can Fight For Abortion Rights
By Tess Garcia
Police Shove 'Full House' Star Jodie Sweetin At An Abortion Rights Protest
By Radhika Menon
5 Ways To Stand In Solidarity With Women In America From The UK
By Sophie McEvoy
Get Even More From Bustle — Sign Up For The Newsletter