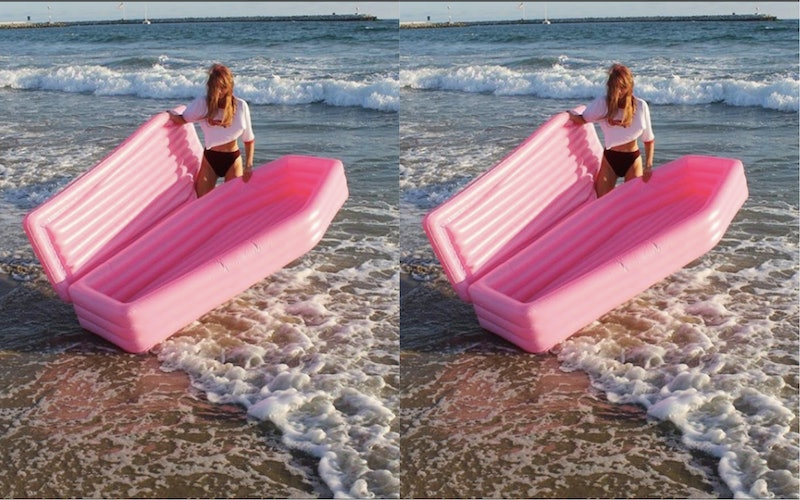 There are few summer pleasures as pleasing as floating about in a large body of water in some type of inflatable pool accessory — because adulting is hard, and truth be told, we’re never too old for beach toys. Now that we are — finally — in full bucolic and summery swing here in the northern hemisphere, pool parties and beach trips abound. And if your mood happens to rest somewhere between whimsical and … just a tad fatalistic this summer of 2018, consider this millennial pink coffin float for your next pool party. Not bad for a conversation starter, right? I mean, who else but you is likely to show up at your next swim party with a lidded inflatable coffin, and in millennial pink no less?

Canadian designers and friends Ian Felton and and Andrew Greenbaum created the somewhat adorable-yet-also-creepy pool float in an effort to bring a touch of macabre whimsy to your next aquatic event, but funds are still being raised in order to launch the coffin pool float en masse, according to a caption that Greenbaum wrote on a July 4 Instagram post about the float. Greenbaum also wrote that the design duo started working on the coffin float concept three years ago, and recently had a sample prototype drawn up. The pink coffin pool float isn’t quite ready for purchase yet, however, as the design duo are “about $15,000 short from being able to sell this to ya’ll." He goes on: Let us know if you think a kickstarter would be a cool idea or if you have a rich daddy who wanna invest.”

Not only are Instagrammers everywhere feeling the vibe of that just-so-shade-of-pink coffin pool float, but the dark hearts of the Twittersphere are also awash in semi-morbid glee.

And in case you’re looking for an array of creative pool toys for your next watery bash — as you eagerly await mass production of that millennial pink coffin float, of course — from sharks and butterflies, to donuts and wine bottles, you’ve got creative and floaty choices aplenty for your next poolside soiree.

And as you eagerly await production of that pink coffin pool floatie, you can check out a worthy substitute here:

And in case that millennial pink coffin pool float has won the day, and stolen your heart for all swim-related events forever moving forward — fear not, gentle reader: a Kickstarter is most definitely in the works if enough folks are interested in purchasing the more-than-a-tad nihilistic pool accessory. Hop on over to Andrew Greenbaum's Instagram page, and make your love known, stat.