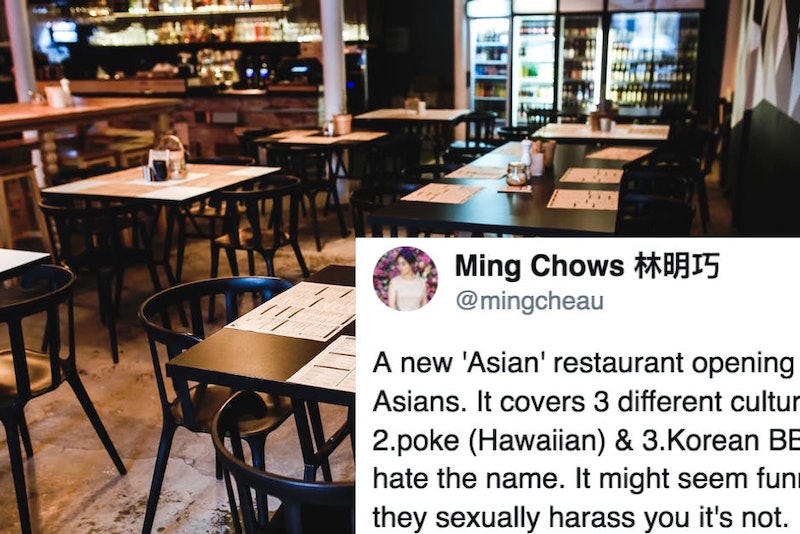 Just in case you haven’t had your fill of offensive news lately, owners of a ramen shop in South Africa called “Misohawni” apologized after they realized — oops, surprise! — it’s a pretty blatantly racist name for an Asian restaurant. In a statement posted to the restaurant’s Facebook page, owners Ryan Vermaak and Fabio Di Cosmo acknowledged the backlash they’ve recently received, writing that they are “deeply sorry” and intend to rebrand the restaurant. Update: In a statement emailed to Bustle, Vermaak and Di Cosmo said: "The name was wrong, the reason we chose it was wrong and in short, we were wrong.” They also said they're currently working on rebranding and "should have something new during the course of next week."

“Let us start by saying that this was never our intention and we are truly and deeply sorry for any hurt that we may have caused. … Opening an Asian fusion restaurant has been a dream of ours for many years and this came from a place of us being inspired by the food and wanting to celebrate Asian culture and not to mock it. In our enthusiasm to open the restaurant however we fully admit that we showed serious lack of expertise and understanding when it came to the name and fell back on an ingrained stereotype that we clearly did not understand - and for that we are sorry.”

In addition to the questionable name, the “Asian fusion” restaurant, which is located in the Johannesburg suburb Melville, features a mishmash of East Asian dishes including ramen, Korean BBQ, and poke.

Online, many were quick to point out the problems with the name and seemingly careless blend of cultures, writing how the restaurant appears to be less celebratory of Asian culture and more a sweeping stereotype of Asian people.

As Taiwanese-born, South Africa-based writer Ming-Cheau Lin tweeted, “A whole group of people discussed and okayed this. That's what kills me! No one thought it was a bad idea!!”

The pinned Facebook post with the restaurant’s statement clarifies, “This page will remain open until the new rebrand has taken full effect.” However, the post does not mention a timeline for the rebranding.

The owners intend to use the backlash as a “learning experience” as they go forward rebranding. As the restaurant’s Facebook post continues:

“We have taken heed of what the public are saying and it is important that we take it seriously, with this in mind we are currently in the process of a rename to ensure we can give the people of JHB a place to enjoy regionally inspired Asian Cuisine” … “We are happy to engage with the community, and anyone who we have impacted, with the intention of opening dialogue with them, because while we’ve learned from this experience we believe that there is always an opportunity to learn more.”

In addition to their latest business venture, Vermaak and Di Cosmo have worked in the entertainment industry for 15 years. They’re currently with a media company called — I don’t think you’re emotionally prepared for irony of this name — Tonedef Media.

The restaurant's Facebook statement ends saying that in their previous work the owners “have strived to create spaces and experiences that are safe and inclusive for women and people of all races,” also adding “our intention with our restaurant was always and still is, to do the same.”

(Bustle reached out to the restaurant for examples of this work or any further statement regarding the original name and their rebranding. Update: The restaurant said it would rather not point to specific events as to not implicate or negatively affect any event partners.)

Hopefully, the rebranding will rectify the racist and sexist implications of their initial name by the owners choosing their next "pop culture references" a little more wisely.