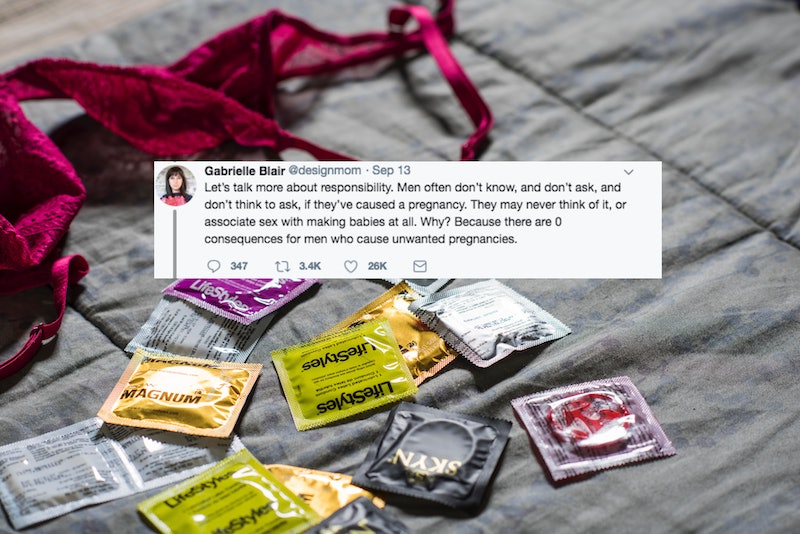 Choosing a birth control method can be a incredibly difficult for many women. Many of us struggle with finding a method that fits in with our lives and doesn't give us every side effect on the box. But why is birth control looked at as a woman's responsibility? A new viral Twitter thread has a lot of people asking that question, because Mormon blogger and mother have six, Gabrielle Blair, said what so many of us have struggled to put into words — why are women seen as being responsible for pregnancy when it's actually men who cause pregnancy? And, even more than that, she explained why men who try to push an anti-abortion agenda or control women's rights actually have no interest in actually stopping abortion.

Why? Because women alone can't create a pregnancy. Blair points out that women can only get pregnant during certain points in her cycle — while every time a man ejaculates there's a possibility of pregnancy. “[B]ut men can cause pregnancy 365 days a year," she tweeted. “In fact, if you’re a man who ejaculates multiple times a day, you could cause multiple pregnancies daily. In theory, a man could cause 1,000+ unwanted pregnancies in just one year.” So women can have sex — and orgasm — with no risk of pregnancy, but every male ejaculation includes a risk. And yet, there's no legislative control on the male reproductive system. So are laws governing a women's reproductive system actually aimed at preventing abortion — or just controlling women's bodies?

She also points out that many men pressure women to have condomless sex, in spite of the huge consequences an unwanted pregnancy can have for a woman. “So, there are men willing to risk getting a woman pregnant – which means literally risking her life, her health, her social status, her relationships, and her career, so that they can experience a few minutes of slightly more pleasure,” she tweeted. “Men regularly choose to put women at massive risk by having non-condom sex, in order to experience a few minutes of slightly more pleasure. It’s mind-boggling and disturbing when you [realize] that’s the choice men are making. We’ve trained men from birth that their pleasure is of utmost importance in the world.”

It's a frustration that many women have felt, but Blair is still surprised at the huge outpouring of support she's had over her tweet. "The response has been overwhelmingly positive," Blair tells Bustle. "I actually wrote the thread about three months ago, but hesitated to share it. Twitter can be an ugly place and I worried that my family might have to deal with trolls or threats."

So what inspired her to finally publish it? "Watching the Kavanaugh hearings got me to hit publish," she says. "I braced for an angry response, and instead, have received comment after comment that is supportive, encouraging, and profound. Sure there are some people who want to argue, or seem intent to misunderstand, but they are very small number. So many of the stories have brought me to tears — in a good way. I've heard from women who are struggling with horrible side effects from birth control, and after reading the thread have had a sudden realization that their spouse/significant other could (and should) handle the birth control instead — and that he would suffer essentially zero side effects. I realize that seems like basic common sense, yet we never talk about it like that, and just assume women will handle the birth control and deal with the effects."

For Blair, some of the most heartening responses have been from men who haven't put in a position to think about this issue before. "Personally, I'm a believer that most human beings (women and men) are good people, and they want to do right by others, and especially by the people they love most," Blair says. "So I love seeing the men, who have never really thought about how the actions of males cause unwanted pregnancies, and hearing how the thread was a game changer for them."

But what about the most basic question — why we don't hold men responsible for pregnancies in the first place? "I've thought about this A LOT, and I continue to be unclear on why we as a society are so reluctant to hold men responsible for unwanted pregnancies — or even see them as part of the cause," Blair says. "For sure it's at least partly due to our longstanding and deeply embedded patriarchal culture. We rarely question making things harder for women, as long as it makes things easier for men. I wonder too, if lack of technology has contributed to the problem. Meaning, for most of history, there was no definitive way to tell who the father was in any pregnancy, so if a man said, 'It wasn't me!' there wasn't much anyone could do. But now, we have DNA testing, making it much harder to give a flat denial." It's about time that we moved past this societal inequality.

But we have a long way to go. In a recent Bustle Trends Group survey of 226 women ages 18 to 34, only 35 percent of participants agreed they share the responsibility of birth control with their partner. In fact, 54 percent said birth control was mostly their responsibility and only one percent said it was mostly their partner's responsibility, which is startling considering that a man can wear a condom without the side effects many women suffer through for birth control. But as one participant said, " Birth control is seen as a woman's responsibility — if she gets pregnant, it's always solely her fault." Another participant put it even more bluntly, saying, "I still feel it's all on us to prevent unwanted pregnancies because we will be shamed in society way more than a man who got a girl pregnant."

These sentiments are depressing and worrying, but even more so in the current political climate. As Blair points out, many women were upset and disturbed when Kavanaugh referred to birth control pills as "abortion-inducing drugs", making it clear that he is no friend to women's reproductive rights. As women's rights under threat more and more, it's important to keep the conversation going about what politicians and law-makers are actually policing — and how to protect women's autonomy.

It's been far too long that the burden of birth control has fallen almost solely on women, and it's also been far too long that women bear the stigma and shame from society when there is an unwanted pregnancy. Blair's thread has blown open such an important conversation about legislation, shame, stigma, responsibility, and so much more — and it's one that's long overdue.