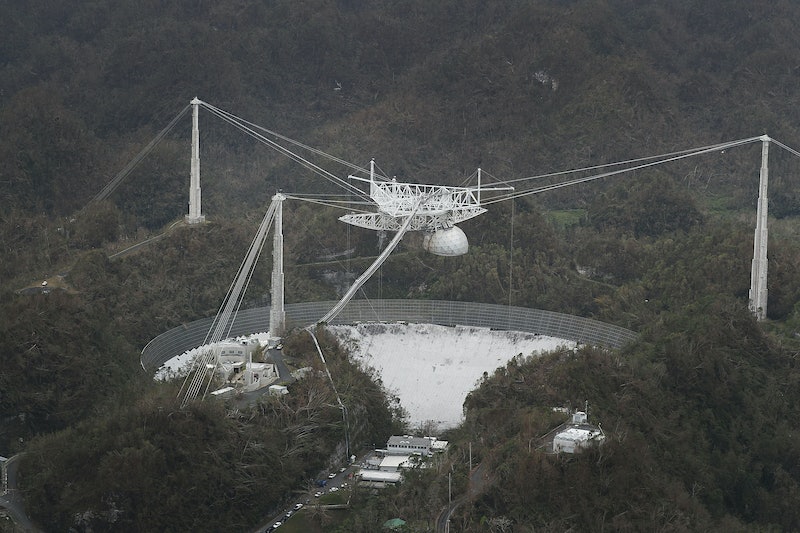 When near-Earth object 2017 YE5 recently swung by Earth, scientists made an incredible discovery: Not only is 2017 YE5 actually two asteroids orbiting each other, not one solo asteroid, but the truly special part is that those two asteroids are roughly the same size, making 2017 YE5 the fourth ever observed equal mass binary asteroid, according to a July 11 press release from NASA. This incredibly rare space treat was observable from June 21 to June 26, and yes, the scientists who caught a glimpse of it are super excited.

To put it in perspective, around 15 percent of the tens of thousands of known asteroids in the solar system are binary asteroids, Gizmodo reported. But the vast, vast majority of those binaries involve one larger object, and one smaller object. Equal mass binary asteroids make up only a miniscule fraction of documented objects, which is why this discovery is so thrilling.

According to NASA's press release, 2017 YE5 was originally discovered in December 2017, but it wasn't close enough to Earth for us to find out anything more specific until June, when it made a flyby at around 3.7 million miles from Earth, Gizmodo reported. As 2017 YE5 made its approach, the first observatory to realize it's more than meets the eye was NASA's Goldstone Solar System Radar, in California. The scientists there rang up the scientists at the Arecibo Observatory in Puerto Rico, who then further teamed up with researchers at the Green Bank Observatory in West Virginia.

While it's charming to imagine all the scientists playing the world's most excited game of telephone, this team-up was actually for a scientific purpose, NASA reported. When Arecibo Observatory and Green Bank Observatory worked together, they were able to create a bi-static radar configuration, "in which Arecibo transmits the radar signal and Green Bank receives the return signal," according to NASA's press release. Working in tandem with this configuration, the observatories confirmed that 2017 YE5 is an equal mass binary, and were also able to record some frankly stunning imagery of it, which is available for viewing on NASA's website.

In addition, scientists' observations showed that 2017 YE5's two objects "revolve around each other once every 20 to 24 hours," according to NASA's press release. And scientists saw that 2017 YE5 is rare in yet another way: It appears to be one of around just 50 other binary asteroid systems where there's a a "striking difference in the radar reflectivity of the two objects," whch means the twin asteroids that make up 2017 YE5 may have radically different densities, "compositions near their surfaces, or difference surface roughnesses," according to NASA's press release.

Though it would be ideal to be able to learn everything possible about 2017 YE5 right now immediately, we unfortunately won't have another glimpse at it for more than 170 years, Space.com reported. But until then, we do have other binary asteroids to occupy our time, including Didymos, which, unlike 2017 YE5, is a much more common different mass binary asteroid. According to Tech Times, its larger body, informally called Didymain, is 2,560 feet across, and its smaller body, "Didymoon," is 530 feet across. Didymos is about to become part of a test for "NASA's planetary defense plan against potential asteroid collision," Tech Times reported.

During the first part of the mission, in October 2022 and 2024, NASA's Double Asteroid Redirection Test (DART), will ram Didymoon to provide data about how DART can affect asteroids, according to Tech Times. To be clear, Didymos does not pose a danger to Earth, but the data collected by this test from the followup Hera spacecraft mission, which will reach Didymos in 2026 to observe DART's effects, will be able to help us defend Earth against any asteroids that may pose a threat in the future.

We're likely to learn tons of new information from DART, just as we did with observing 2017 YE5, but at least one observation is something we already knew: Space is wild.

More like this
The Guide To “Witches Stairs” & Why They’re Actually Great For Small Spaces
By Emma Garza
The Summer Solstice Spiritual Meaning, Explained
By Jessica Booth and Brittany Beringer
13 Summer Solstice Quotes To Celebrate The Longest Day Of The Year
By Sadie Trombetta
5 Ways To Stand In Solidarity With Women In America From The UK
By Sophie McEvoy
Get Even More From Bustle — Sign Up For The Newsletter