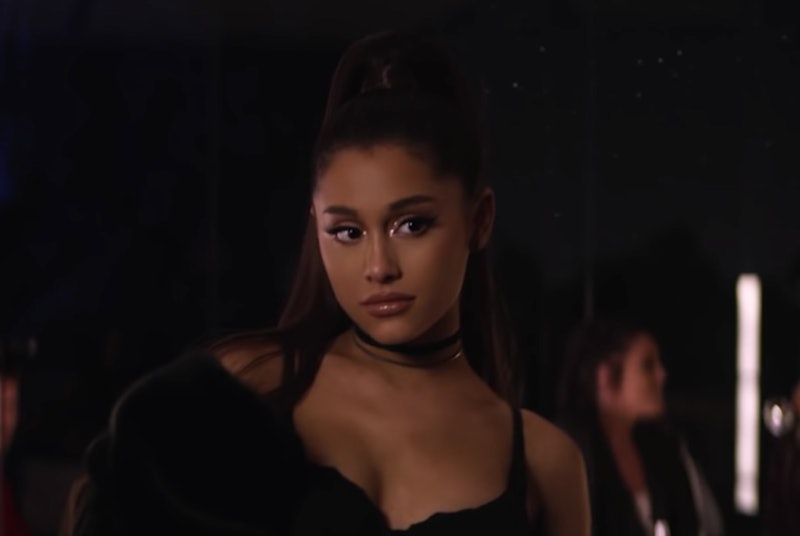 In the past seven months, Ariana Grande has released two albums, multiple hit singles, and kicked off a world tour. She's broken pop music records, and navigated life in the spotlight expertly, making her one of the year's brightest stars. And to celebrate that success, Ariana Grande might drop a new song next week, because her hit-making team just can't quit when inspiration strikes, it seems.

On Wednesday March 27, Grande was communicating on Twitter with her fans, as she is wont to do, and revealed that there's a song she's been working on with friend and frequent co-writer Victoria Monet that she wants to drop — now. She wrote, "man, let’s drop it tomorrow night @VictoriaMonet 🖤 seven rings is ab to be number one for eight weeks and the album might go back to no. 1 too.... we need to celebrate tbh ! life too short and too sweet rn. 🧚🏼‍♂️ hmmmmmmm." Grande's most recent hit, "7 Rings," has been on Billboard's Hot 100 for seven weeks now, according to the magazine's site. Billboard has also noted that Grande is one of only 20 artists to have "topped the Hot 100 for seven or more weeks with at least two singles."

Hours after Grande posted that tweet, Monet responded that they should drop it Monday to celebrate eight weeks at the top of the Hot 100 chart. "Cause this sh*t is insaaaane," she wrote. Grande then admitted that Monday would probably be the best release date because it turns out the new song is "not mastered or ready or delivered," yet. "see, this is why i can’t go on twitter anymore. i get too excited and say sh*t i shouldn’t. however, monday is soon enough ! we love uuu. 🌑," she wrote.

On her Instagram, the singer also posted a screenshot of Monet's Insta Story on her own Story, teasing the upcoming drop. Monet's original post was a screenshot of the Notes app that has the sound file titled "Monopoly" in it. There's a top hat emoji strategically placed over the timestamp at the end of the song, so no word how long it is yet. Grande wrote, "aw let's drop it" on her story underneath.

On Twitter, Monet replied to Grande's declaration that the song release would be pushed to Monday, writing, "Oh sh*t so it’s finna be #MonopolyMonday 🎩🎉 bet let’sGOOOOO BESFRENNN." Grande also told a fan that they're still trying to release the track as soon as possible (so don't rule out a surprise drop this weekend), but that due to calls they have to make, Monday is the best bet. Another fan chimed in suggesting Grande get some sleep, but there's no rest when you're trying to make another banger, according to Grande. "well, honestly we’re all up working on getting this sh*t finished for u lol and we can’t yet! but we’re on it, promise 🌫 soon as f*ck," she wrote.

With the release of "Monopoly" on the horizon, it's safe to say that Grande's year of making hits and taking names isn't slowing down anytime soon.