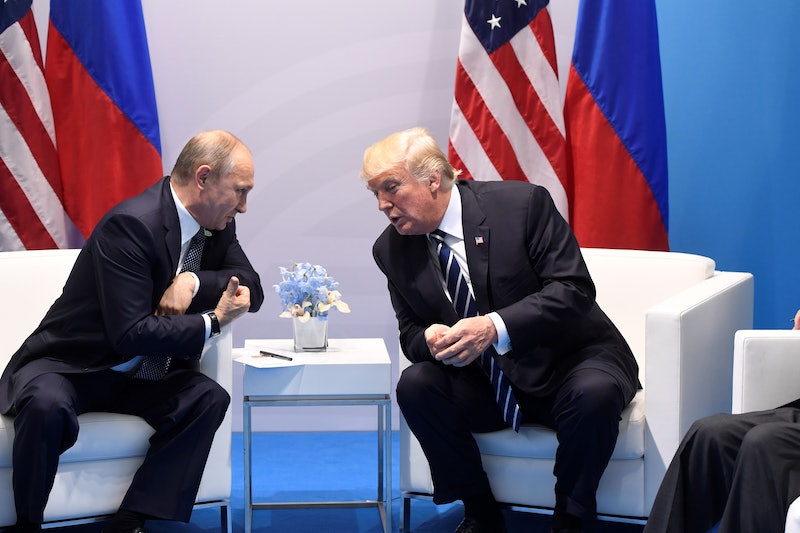 The ongoing Congressional probe into alleged Russian interference in the 2016 presidential election has turned up new evidence Wednesday — someone was reportedly trying to get Donald Trump's campaign and Vladimir Putin to meet. According to a report by CNN, the meeting was set up via email by "an individual who was seeking to connect top Trump officials with Putin". At this time, it's unknown whether the meeting actually occurred or not.

CNN also reported that current White House deputy chief of staff Rick Dearborn was the Trump campaign official who was initially connected to this mysterious individual before informing other campaign officials about the offer. The Russian connection in Dearborn's email was identified only as being from "WV." This all took place right around the same time of the controversial meeting between Donald Trump Jr. and a high-profile Russian lawyer.

Dearborn was formerly Attorney General Jeff Sessions' chief of staff, who has also come under fire for misrepresenting meetings with Russian ambassador Sergey Kislyak. The Congressional probe may now shift to focus more on Dearborn to get more information regarding an April 2016 speech of Trump's at the Mayflower Hotel. Dearborn was reportedly instrumental in bringing Kislyak to the event, but it's unknown whether Kislyak ever interacted with Sessions at the event. During his testimony before the Senate Intelligence Committee in June, Sessions denied that he spoke with Kislyak at the event.

Many leaders within the United States intelligence community still firmly stand by allegations that Putin was responsible for ordering attempts to influence the U.S. election, in part through digital hacking efforts. What is still as yet unproven is whether there was a direct link between Putin and the Trump campaign, whether the campaign knew about those attempts and failed to inform the proper authorities.

However, Trump himself and members of his inner circle have tried repeatedly to obfuscate any connection. In addition to the unreported meetings, Trump also allegedly tried to mislead a reporter in an interview earlier this summer by claiming that other countries may have been behind the hacking attempts. That statement was in contradiction to dozens of statements by Congress members and intelligence agency officials that Russia was the only country involved in the hacking.

The new email between Dearborn may not prove anything except the extents to which the Russian government attempted to influence the election — it certainly isn't hard evidence of wrongdoing on behalf of anyone in the Trump campaign. Yet this further twist in the story tighten the connections between Moscow and Trump Tower in a manner that should not be ignored.