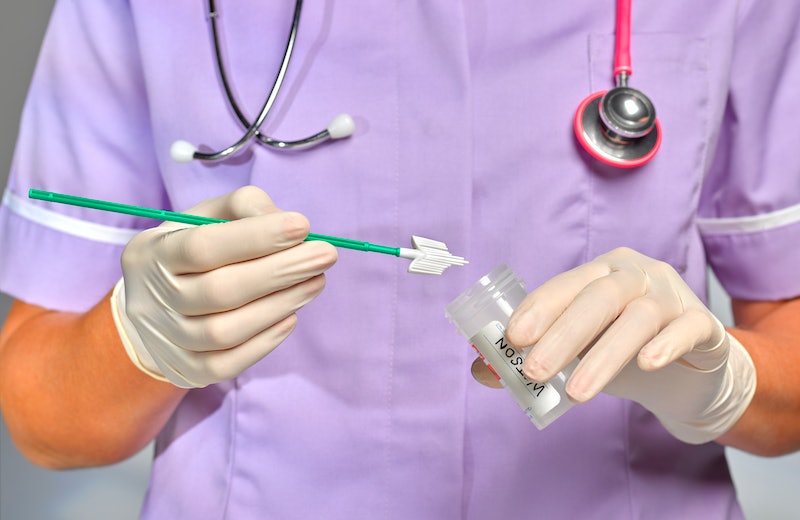 Changes to the cervical cancer screening programme in England, Scotland, and Wales is likely to result in a higher number of people being diagnosed with the HPV virus. As the BBC reports, summer 2020 will mark the introduction of new smear tests. Previously, samples were tested for cell changes in the cervix first. From summer, they will test for HPV first; the virus that is responsible for almost all cervical cancer cases, per the NHS.

The new screening method, Science Focus reports, is designed to help detect signs of infection before cancer develops, allowing doctors to have a better idea of a person's cervical cancer risk. If HPV is detected with no cell changes, patients will be asked to come back the following year for a second test. But if both the virus and abnormal cell changes are found, further tests will be needed straight away, reports the BBC.

Around eight out of 10 people will be infected with HPV at some point in their lives, states Cancer Research UK. Yet, due to invisible symptoms, most people will not find out, with the infection disappearing on its own over time. Now, though, this lack of awareness is set to change.

It's time perceptions changed, too, Kate Sanger from Jo's Cervical Cancer Trust told the BBC. Although the virus is technically a sexually transmitted infection (STI), it is so common it should be viewed in the same realm as a common cold, she said.

But a survey by the trust found that, out of 2,000 participants, 10% would feel "dirty" if told they had HPV. More than 40% said being diagnosed with the virus would impact their sex and dating lives. Many would even think differently about a current relationship. Half would consider ending said relationship if they had HPV, while 57% may believe the virus was a result of their partner cheating.

Per the NHS, there are more than 100 types of HPV (also know as human papillomavirus). Most types don't cause any problems, but some can lead to genital warts and certain types of cancer. Passing the virus to another person is relatively easy. Penetrative sex can transmit it, as well as oral sex, skin-to-skin contact of the genital area, and the sharing of sex toys.

Some 99.8% of UK cervical cancer cases are preventable, according to Cancer Research UK. Just over 850 people die of the disease each year; a figure that could be eliminated in the near future, thanks to the new screening method.

As the Guardian reports, NHS screening combined with the HPV vaccine could wipe out cervical cancer in England. The NHS says 600 cases may be prevented by the new screening test; around a quarter of the 2,500 cases reported in England each year. A 2019 study, published in the Lancet, predicted that the cancer could disappear in countries across the globe that followed a strict vaccination and screening programme.

"Screening is one of the most effective ways of protecting against cervical cancer and there is no doubt this new way of testing will save lives," Professor Peter Johnson, the national clinical director for cancer, told the Guardian. "It is vitally important that all eligible people attend their screening appointments to keep themselves safe."

Robert Music, the chief executive of Jo's Cervical Cancer Trust, made an important point. “The day that cervical cancer is a disease of the past is one we should be aiming to get to as soon as possible," he expressed to the paper. "Cervical screening is such an important test, but there are many reasons it can be difficult to attend. We must continue to understand and tackle these to ensure as many people benefit from this far more sensitive test and we save as many cancers diagnoses and lives as possible."