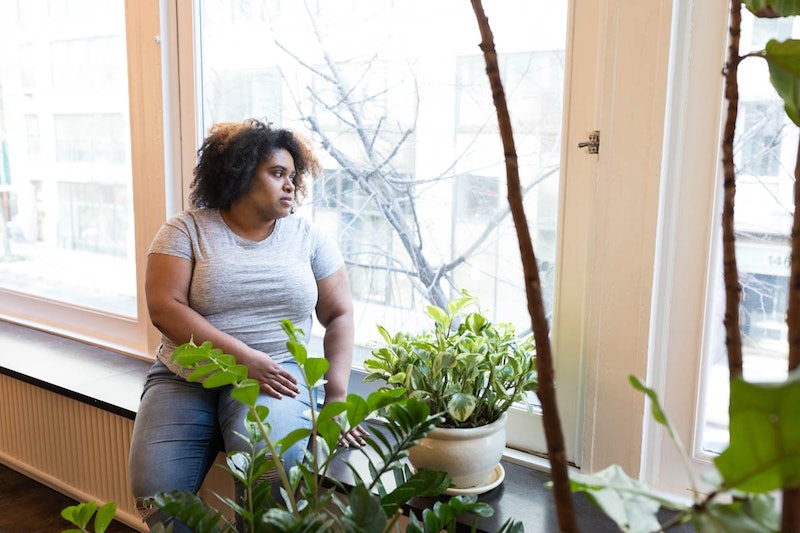 Of the 40 million adults living with anxiety in the United States, only around 37 percent are receiving treatment. This may be due to analysis paralysis (aka, overthinking) about which treatment would be most effective. Antidepressants like SSRIs can help with anxiety symptoms, but they work by altering brain chemistry, and that makes some folks uneasy. Cognitive behavioral therapy (CBT) is another option, but divulging sometimes painful memories to a stranger is a big hurdle, especially if there isn’t a guarantee it will help. The months of trial and error associated with finding the best treatment for anxiety may be a thing of the past, however, thanks to a new clinical test that can suggest whether therapy or medication will work better for anxiety. The test has only been used on a small group of participants thus far, so further testing may be needed before it's widely available, but the results were fascinating, and have larger public health implications.

The researchers used a kind of brain activity called error-related negativity, or ERN, to devise their test. The team recruited 60 adults who have had a history of anxiety disorders and 26 people without anxiety disorders to act as the control group. They then had the subjects play a game where error was inevitable, and tracked how their brain activity responded to that error.

“People with anxiety disorders tend to show an exaggerated neural response to their own mistakes,” the paper’s lead author, UIC psychiatrist Stephanie Gorka, said in a press release. “This is a biological internal alarm that tells you that you've made a mistake and that you should modify your behavior to prevent making the same mistake again. It is useful in helping people adapt, but for those with anxiety, this alarm is much, much louder.” After the game was played and baseline ERN levels calculated, the study participants were randomly assigned to take medication or take part in CBT, which is a type of talk therapy that challenges patients to change their behavior by developing coping mechanisms.

The study found that after only three months, people with high ERN levels experienced reduced anxiety when they were treated with CBT compared to those who took medication. Gorka believes this correlation is due to the nature of CBT, which works well for folks who are already in tune with their own actions. “CBT is all about learning new techniques for reducing anxiety and learning to reframe overly negative ideas or feelings. People highly attuned to their own behavior, as evidenced by their enhanced ERN, might just be more receptive and attentive to the lessons learned through CBT,” she said in a press release.

The researchers conducting the study believe doctors across the country can use their methods when determining how to treat their patients who are suffering from anxiety. “Using EEG to measure ERN before deciding on a treatment give us a simple and objective way to help more people get the right treatment the first time around,” Dr. K. Luan Phan, professor of psychiatry in the UIC College of Medicine and a senior author on the paper, said in a press release. “Patients tend to leave treatment when the first attempt fails to reduce their symptoms. Once people drop out, we lose the opportunity to take care of them, and ultimately these patients continue to suffer from their anxiety,” continued Phan.

Everyone is different, and for some people, neither CBT or medication may be effective, so this test wouldn't be a fix for every case of anxiety. The new test, however, only takes 30 minutes and can save many patients and doctors months of trying to find the best treatment for anxiety.

More like this
I'm Going Off My Bipolar Meds to Try to Get Pregnant
By Anonymous, as told to Anna Goldfarb
5 Crystals To Manifest Better Sleep
By Megan McCarty
The Latest Instagram Trend? Crying On Main.
By Ashley Sumner
The 11 Best Sheets For Night Sweats
By Megan Gray
Get Even More From Bustle — Sign Up For The Newsletter