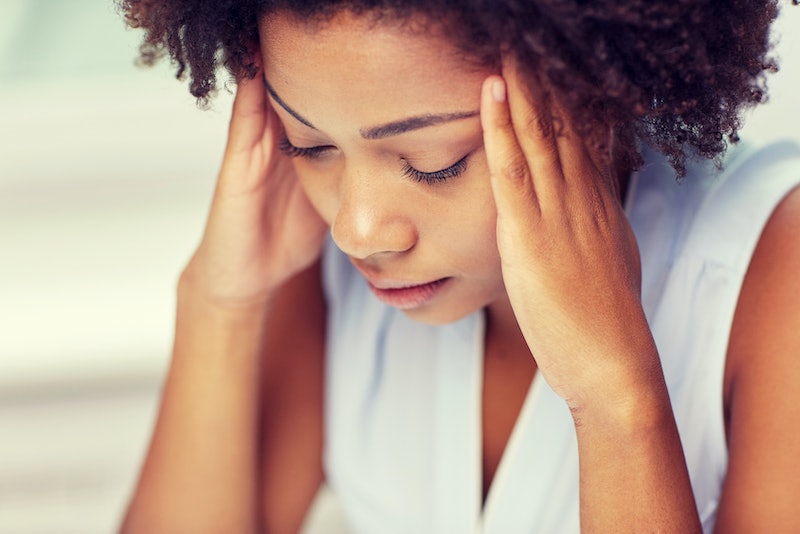 When you're diagnosed with depression, you're usually prescribed medication that falls into two categories: serotonin–norepinephrine reuptake inhibitors (SNRI), or selective serotonin reuptake inhibitors (SSRI). But new research has found that medication that increases a person's psychological resilience and adaptability might help treat depression. According to a report from Scientific American, researchers have found that some people are naturally better at handling adversity. Scientists are now working on developing a new depression medication that could improve a person's psychological resilience and make it easier to deal with stressors, which could make life easier for people with mental illness.

A clinical trial is currently being conducted by the Icahn School of Medicine at Mount Sinai and is expected to end in 2019. If its findings show that resilience-targeted drugs make a difference, it could eventually lead to a revolutionary depression drug. But the word "resilience" is a loaded term, even though it's used in a psychological context, and while early findings from a pilot trial are promising, it's important to be careful about how we discuss resilience and depression. Mayo Clinic describes resilience as a person's ability to adapt and recover when unfortunate things happen. If you aren't as resilient, you may have a harder time recovering after a traumatic event. From the Mayo Clinic:

If you have a resilient disposition, you are better able to maintain poise and a healthy level of physical and psychological wellness in the face of life's challenges. If you're less resilient, you're more likely to dwell on problems, feel overwhelmed, use unhealthy coping tactics to handle stress, and develop anxiety and depression.

But it's important to note that that depression doesn't happen to people who are "weak," and someone's natural psychological resilience doesn't necessarily make them "stronger" than someone who has depression. I don't know how many times I've been told to stay strong and remain positive — even though I've been so depressed that literally lifting my head up has felt impossible, let alone figuratively. Psychological resilience simply means one's brain chemistry's ability to bounce back from adverse events, and is not a character trait. That being said, this research could be good news for a lot of us, especially those who don't ever expect to "recover" from depression based on the current treatment options available.

According to Scientific American, researchers began to make the resilience link after studying mice who endured trauma from other mice. One-third of the mice were able to recover without showing signs of trauma or depression, the article says, while the others had a harder time. The researchers found that the mice who bounced back processed trauma differently, according to the report. Now, researchers are looking at the reward circuits in the brain as a way to enhance resilience. Participants are assigned to a placebo or treatment group, and the latter takes ezogabine, an epilepsy medication.

One in six Americans take psychiatric drugs, and with that in mind, the trial's progression is definitely worth watching. "Depressive disorders are among the most disabling medical conditions worldwide and currently available treatments fall short of addressing this large public health burden," the abstract for the study reads. "Dysfunction within the brain reward system is emerging as a core feature of depressive disorders, in particular related to deficits in motivation, interest, and response to pleasure."

It's too early to say whether a resilience pill will definitively improve lives for depressive patients, and even if it does, it'll be a while before we see it on shelves. But I'm always open to trying new medication, especially if it could work better than existing anti-depressants. If a chemical boost helps those of us who psychologically have less resilience, I'm on board.