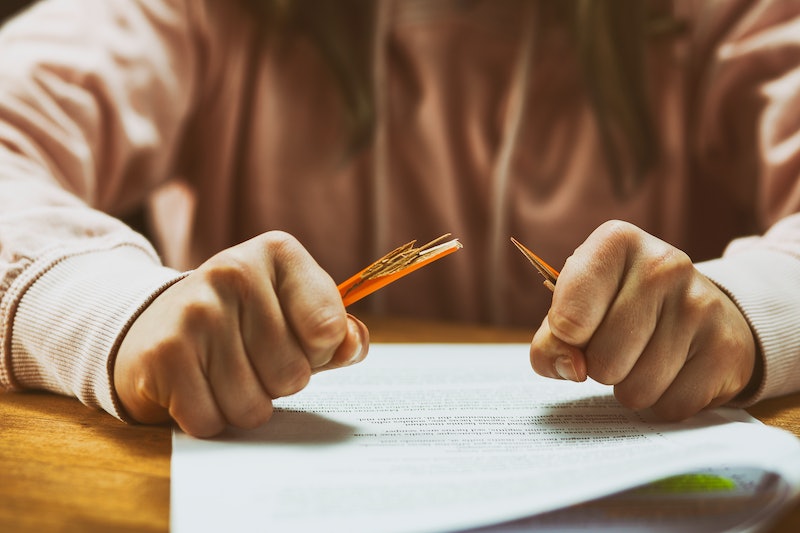 Premenstrual dysphoric disorder, also known as PMDD, is often confused with PMS. But its effects can be much more severe. Still, the condition is regularly missed by doctors and little talked about among people with periods, making it even harder for people to know they have it. Currently, there are few sustainable treatment options, but a new drug trial could pave the way for an effective PMDD-specific treatment.

According to the International Association for Premenstrual Disorders (IAPMD), PMDD affects between two and 10 percent of women of reproductive age. Its symptoms can be both physical and mental, ranging from bloating and headaches to mood swings, anxiety, tiredness, and suicidal thoughts. "The symptoms are so severe that it can impact hugely on patients' wellbeing, performance at work, relationship, and overall quality of life," says Nadendra Pisal, consultant gynaecologist at London Gynaecology.

At least five such symptoms are needed to diagnose PMDD, and these symptoms must be present in the two weeks before menstruation, disappearing a few days after the start of a period. Treatment can be hard to find, as the condition is nestled in the gap between psychiatry and the rest of medicine. The DSM-5 lists PMDD as a mental illness.

“It's confusing,” Dr. Tory Eisenlohr-Moul, chair of the IAPMD's clinical advisory board, told Vice. “If you go to a gynaecologist, they'll check your hormone levels. Hormone levels are perfectly normal in PMDD, so the gynaecologist says, 'you seem fine, try to sleep more, eat more vegetables, and go see a psychiatrist if you need to.’" Psychiatrists, she added, may then refer patients to a gynaecologist.

According to mental health charity Mind, treatment options involve talking therapies and antidepressants (which may or may not make a tangible difference), ordinary painkillers, the combined pill, and injections that can induce a temporary menopause. The last two, however, can come with unwanted side effects. Particularly severe cases may be offered a hysterectomy.

As you can clearly see, there is little recourse for people with PMDD who don't want side effects on top of already debilitating symptoms. So one pharmaceutical company has taken on the task of creating a well-tolerated drug treatment.

As Vice reports, Asarina Pharma is currently trialling a drug called Sepranolone. "It has taken so long to isolate the brain-steroid molecule which seems to be responsible for 80 percent of PMDD symptoms and [this] new drug has been shown to be effective in treating this debilitating condition," notes Pisal.

It works by blocking the effects of a steroid that is believed to cause PMDD: allopregnanolone. In an earlier clinical trial, the drug — which is said to have a low risk of side effects — reduced "key" PMDD symptoms by more than 80 percent in 120 women.

Its new trial is billed as "the largest PMDD trial ever in Europe", will involve 250 women from the UK, Poland, Sweden, and Germany, and will "not only assess the efficacy [of Sepranolone], but also assess other effects," Pisal says. “It is an exciting development and may change the life of this group of women with severe symptoms.”

If all goes well, the drug could be available to patients between 2024 and 2025, reports Vice. A long way off for those currently with the condition, but progress nonetheless.

The company is also looking into the effects of the same drug on menstrual migraine; a migraine that occurs between two days before a period and three days after it begins. According to The Migraine Trust, it impacts less than 10 percent of women.

Asarina Pharma states that menstrual migraine is "highly resistant to current treatments" and is therefore searching to find a better option. To do so, it is looking to recruit a group of 80 to 90 female volunteers aged between 18 and 45 and living in Sweden or Finland.