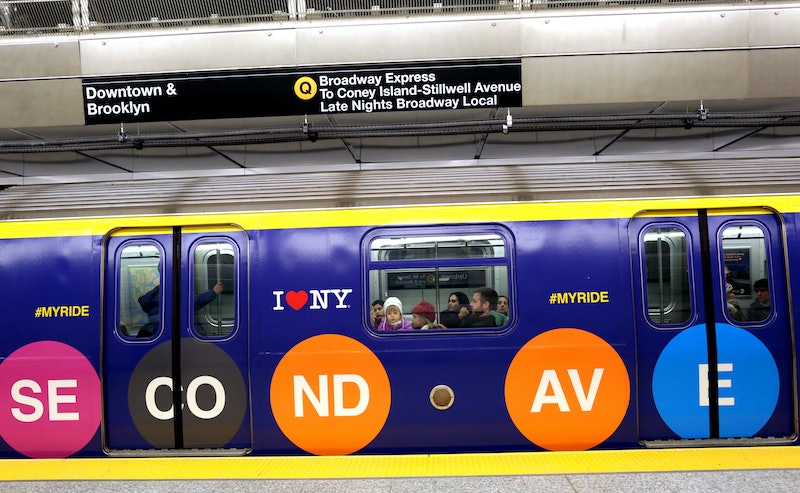 If you live in New York City and ride the MTA (which totals 1.76 billion in terms of annual ridership), you probably already know about the MTA-sponsored "See Something, Say Something" advertisements. Hard to miss, they cover the interiors of various lines that chug through Brooklyn, Queens, Manhattan, and the Bronx. However, according to a report by the Gothamist, the hyper-vigilant New York train ads got a resistance makeover by an anonymous artist.

The subversive facelift was installed overnight in two cars across the entire entire system. They mixed up with the original posters from the MTA's March 2016 campaign encouraging commuters to be more observant about their surroundings and report any suspicious activity to MTA authorities or the NYPD. The artist installed the makeover overnight in the hopes, Gothamist reported, that the MTA would not track them down immediately and remove them.

The artist behind the makeover campaign told the Gothamist that the purpose behind slightly modifying the ads is to encourage people to report suspicious activity emanating from politicians, governmental bodies, and law enforcing agencies. In other words, "see something, say something" applies to more than just, say, reporting someone with a suspicious bag on the subway to authorities.

The artist did make note that he does not have any issues with the MTA's advertisement. "[G]iven the state of the world that we're in, I wanted to do something that took that conversation and elevated it so that people could be vigilant beyond what's directly in front of their eyes," he told the Gothamist. In other words, this artist wants people to think outside of the box a little when it comes to being both responsible and involved.

According to the Gothamist, MTA spokeswoman Beth DeFalco said that the posters are "illegal." Various possible issues were cited such as vandalism, theft, defamation of character, impersonating transit workers, and more to highlight the purported illegal nature of the artistic endeavor. She said the fake ads would be removed and those engaged in posting them could face fines and penalties.

The MTA remains one of the most politically-charged venues for New York City's dwellers, where many activists use their art as a medium to express their social opinions. In such one instance, Matthew Chavez’s Subway Therapy project, comprising of sticky-notes with inspiring messages, became a viral sensation after the election.

Although the subversive modifications to the ads will be removed, keep your eyes peeled for more inspiring art subtly making its way underground.