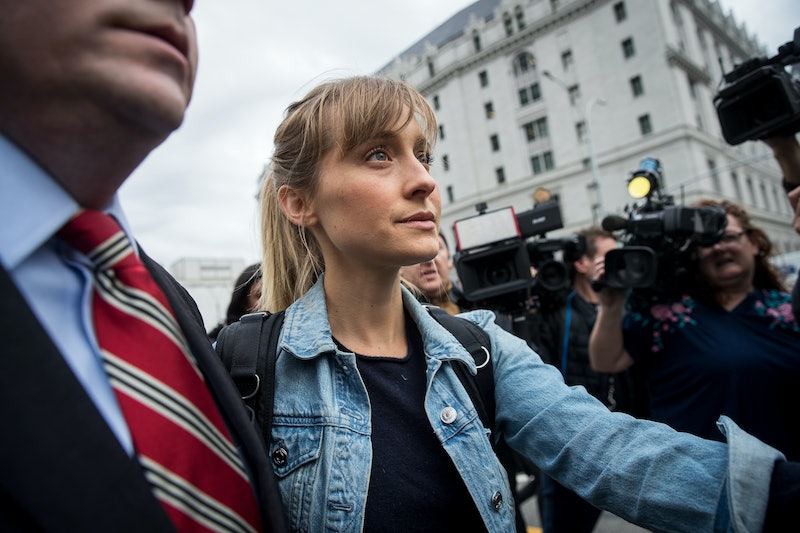 The story of NXIVM, the secretive organization currently under federal investigation for being a suspected sex cult, is stranger than fiction and now it's officially coming to HBO. On Thursday, April 18, it was announced that HBO is working on a NXIVM documentary series that will delve into the organization's disturbing past and present, which includes accusations of sex trafficking. The docuseries, which does not yet have a release date, is focused on telling the true story of NXIVM from the perspective of those who spent time in the organization, including one of the series' co-directors, Jehane Noujaim.

According to a press release from HBO obtained by Bustle, the documentary will tell the stories of "a range of people" who joined NXIVM (pronounced Nex-ee-um), which has been described as a "cult-like self-help group" by USA Today. Based in upstate New York, the secretive group was essentially disbanded in 2018 after allegations emerged of sex trafficking and forced labor within the organization. "The show will take a deep, nuanced look at experiences of its members, spotlighting their universal desire for personal growth," HBO stated in the release.

The series will be directed by Noujaim and Karim Amer, the duo behind the 2013 Netflix documentary The Square about the Egyptian revolution. And according to the press release, Noujaim actually has a personal connection to NXIVM: in 2010, she took NXIVM's introductory "Executive Success Program" workshop. "She brings an illuminating perspective to the media spectacle surrounding this polarized community as it faces federal investigation," reads the press release.

In 2017, an expose on NXIVM by the New York Times led to a federal investigation of the group and its founder Keith Raniere. The NXIVM leader allegedly established a more secretive club within his group called Dominus Obsequious Sororium (DOS), Latin for "master over the slave women," according to Refinery29. Federal prosecutors reportedly believe women in DOS were part of a "slave and master" system, and found evidence that women were allegedly branded with Raniere’s initials and forced to have sex with him.

In March of 2018, Raniere was arrested and charged with sex trafficking and a racketeering conspiracy. One year later, in March of 2019, he was also charged with exploiting a child and possessing child pornography, as reported by the Associated Press. He has pleaded not guilty to all charges and is scheduled to face trial starting on April 29.

The case earned an extra amount of media scrutiny thanks to Smallville actor Allison Mack, a high ranking member implicated in Raniere's alleged crimes. The former television star has been accused of being heavily involved in DOS, and she was also arrested and charged in 2018 for her role in the alleged conspiracy. On April 8, Mack pleaded guilty to racketeering conspiracy and racketeering charges, according to Time, admitting that she manipulated women into becoming Raniere's sex slaves. “I believed Keith Raniere’s intentions were to help people," Mack told a judge in Brooklyn, "and I was wrong."

HBO's NXIVM docuseries won't be the first documentary about the organization. Last year, the A&E series Cults and Extreme Belief spoke with Sarah Edmondson, a former recruiter for NXIVM, about the group's "self help" classes in its very first episode. But this latest documentary series seems to be aiming to be a detailed investigation not just into the charges against Raniere and Mack, but also the people affected by their alleged actions.

The HBO documentary series is bound to give the world a closer look at the allegations against the organization's leaders, as well as the impact they had on its members.