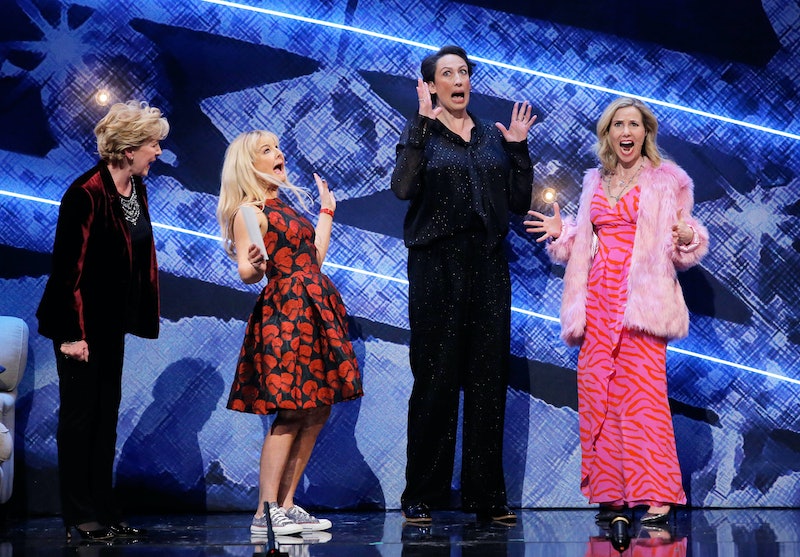 Been secretly praying for the return of Miranda Hart's hilarious series? Well, your wish has finally come true. Kinda. On Friday, the actress and comedian took to Twitter to announce some very special news. Explaining that November will mark the 10-year anniversary of her sitcom, she declared that a Miranda special will be hitting TV screens in late 2019.

"We are 10! And we have decided to have a party," the 46-year-old queen of comedy wrote. "The Miranda cast on and off screen are all about play, being free to be ourselves, and silliness, so we are amazed and delighted that BBC One have agreed that our celebrations will be recorded as a one hour special later in the year."

She added: "I will keep you posted, but I suspect there might just be some special guests, probably the odd bit of dancing, definitely some drinks and nibbles. And you know what I hope it will be — SUCH FUN for us, but more importantly for you, all you lovely friends of the show for whom I shall be forever grateful for your support."

Many people took that to mean an entirely new episode, so Hart was forced to clarify that the special would not be scripted. Instead, it will be a party with lots of sausage rolls. It's not clear if all of the main cast will be returning or who the special guests will be, but Gary Barlow has to be in there somewhere, right?

Coincidentally, Miranda star Sarah Hadland — who played Miranda's best friend Stevie — spoke about the upcoming anniversary earlier this week. "It's quite a big milestone, we're all quite shocked," she told the Sun. "We're hopeful that Miranda will make some more."

The final episode of the sitcom aired on New Year's Day in 2015 and saw Hart's character finally marry her long-term love, Gary. The actor who played Gary, Tom Ellis, has been spending a lot of time in the U.S., according to Metro, after taking on the role of the devil in the series Lucifer. The final season is reportedly due to start production soon.

But Hart has enjoyed Stateside success too. Although she is best known for her BBC sitcom and appearances in the likes of Call the Midwife, she also starred alongside Melissa McCarthy and Jason Statham in 2015 film Spy. (In fact, according to the Guardian, McCarthy said Hart was "one of the funniest people [she had] ever met.")

One thing's clear: the upcoming special is sure to kickstart the Miranda rumour mill all over again. In 2017, people really believed there would be a fourth season of the show, reports Digital Spy — especially after Ellis said a potential storyline could explore Miranda and Gary's life as a married couple. Hart then told The One Show she was "thinking about it" but, in January 2018, denied the series' return, according to Radio Times.

Whether this really is the last you'll see of Miranda remains to be seen. But the end-of-year party guarantees to be such fun.

More like this
This Dark 'Happy Valley' Theory Is Staring You Right In The Face
By Sophie McEvoy
Twitter Is Burning As Phoebe Dynevor Reveals Daphne’s 'Bridgerton' Exit
By Sophie McEvoy
'Happy Valley' Recreated This Moment From S1 In Its Penultimate Episode
By Sophie McEvoy
'The Last Of Us' Has Officially Been Renewed For Season 2
By Darshita Goyal
Get The Very Best Of Bustle/UK
Sign up for Bustle UK's twice-weekly newsletter, featuring the latest must-watch TV, moving personal stories, and expert advice on the hottest viral buys.