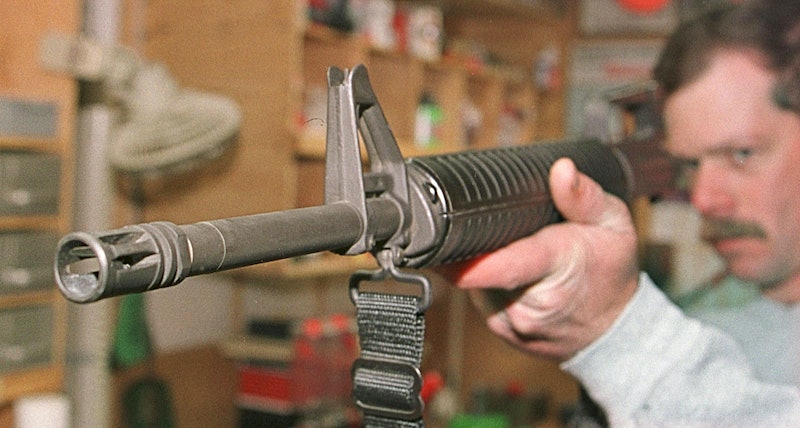 The Wallenpaupack Area School District in Pennsylvania recently announced it will be closing one of its elementary schools due to a nearby, church-led semi-automatic rifle blessing event on Wednesday. While the superintendent of the school district, Michael Silsby, told parents that there is "no direct threat" to students from the event, he cited traffic issues and the "nature of the event" as reasons for the closure.

According to the Times-Tribune, the World Peace and Unification Sanctuary in Newfoundland, also known as Sanctuary Church, has invited couples to an event to bless their semi-automatic rifles at 10 a.m. on Wednesday. Richard Panzer, the church's president, wrote in an email to the outlet that couples are being asked to bring the weapons for a blessing “to show their willingness to defend their families, communities and nation.” The church also noted that couples who cannot purchase an AR-15 or something similar before the blessing ceremony on Wednesday should buy a $700 gift certificate from a gun store to demonstrate that they plan to purchase the weapon in the future.

Penzer noted in the email to the Times-Tribune that a few hundred couples from around the world are expected to attend the ceremony. He also added that precautions would be taken to ensure gun safety, saying "All of the weapons in the ceremony will be checked to make sure they are unloaded, with a zip tie so that no bullets can be inserted ... We are inviting local and state police to be on the premises, so that everything goes safely."

According to the Philadelphia Inquirer, Silsby, the aforementioned superintendent, emailed parents on Friday to make them aware of the event and announce the closure of Wallenpaupack South Elementary School. Silsby informed parents that, due to the closure, students would be bused to a different elementary school for the day — one that is nearly 15 miles away. However, Silsby also noted that children who do not come to school on that day will be excused, saying to parents, "We respect your decision if you choose to keep your children home for the day." The Inquirer reported that the closure will affect around 260 students.

According to the Times-Tribune, the Sanctuary Church is led by the Rev. Hyung Jin Moon, the son of Korean-born Sun Myung Moon, who founded the Unification Church in the 1950s. As David Singleton of the Times-Tribune described, the church "espouses a social conservatism, including a division of the sexes and opposition to alternative lifestyles."

The church also held a “President Trump Thank You Dinner” on Saturday, which, according to the Washington Post, was created as a fundraiser for the group Gun Owners of America. The Post also noted that the dinner was co-sponsored by Kahr Arms, a weapons manufacturer owned by Moon’s brother.

According to the Pike County Courier, a protest vigil will be held at the Pike Country Courthouse on the day of the gun blessing event. The vigil is being organized by the Delaware Valley Democratic Club and will include a reading of names of students murdered by assault rifles in Parkland, Florida and during other mass shootings. Organizers told the Pike County Courier that the purpose of the vigil is to stress "that there is no room for hate and glorification of the AR-15 in NE Pennsylvania ... Imagine people who will be driving and walking through our rural Pennsylvania communities that night carrying these weapons of mass murder.”

According to WNEP, an ABC affiliate, some local parents are concerned about the message being conveyed by the event as well. One parent, Liz Zoccola, described the event as "scary" to WNEP while another, Kendra Hanor, said "I wish they wouldn't have it at all. I don't think there's a good time to have it, especially this close [to the recent Parkland shooting]."

While the school district is taking every precaution to shield students from the AR-15 blessing event, it is clear that many find the event — and its message — very disconcerting.