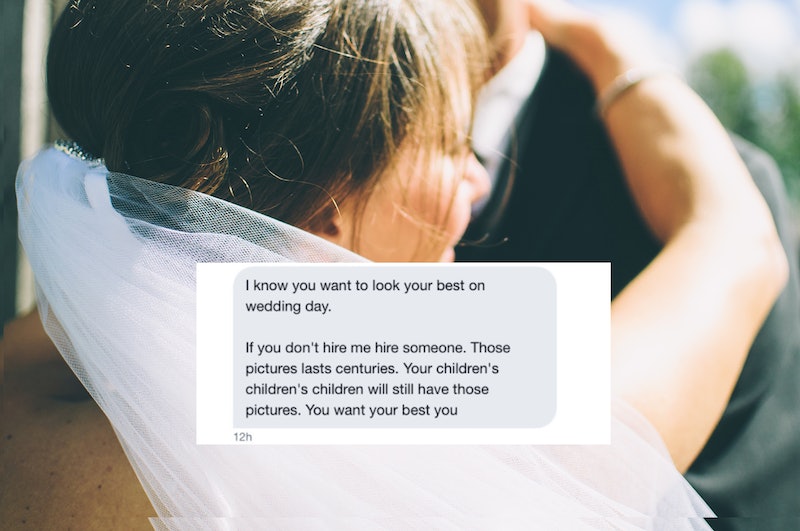 Most brides and grooms want to look their best for the big day. If ever there was a time to be an irresistible glamazon, it's the ceremony when the love of your life has one last chance to back out of a lifelong partnership. Unfortunately, "looking your best" is often synonymous with losing weight for a wedding, to the point where an entire cottage industry has sprung up around becoming a buff bride. One woman saw this in action when a personal trainer tried to pressure her into losing weight for her wedding — a conversation that didn't end well for the trainer when she revealed it on Facebook.

Cassie Young, the digital director for a nationally syndicated radio show, recently announced her engagement online. Soon afterward, an unnamed personal trainer reached out to her on Twitter with an offer: "Hire me to get in shape for your wedding." She politely declined, saying she is already in shape.

Any reasonable person would have ended the conversation there, but the trainer continued to press, reminding her that wedding pictures are passed down through generations. "You want your best you," he wrote, according to the screenshots Young posted on Facebook.

The implication, of course, is that Young is currently less than her best. In response, she sent him a dressing-down for the ages:

"I know I'll look my best because I'll be so happy I'll get to marry the man I love! I know it's probably hard for you to understand this, but it's taken me a long time to love my body. ... Health is one thing, and it's something I'm working hardcore on. But the idea of me being embarrassed by my wedding pictures because I might be "fat" in them and people centuries from now will be ridiculing me? That's the insinuation and I say [f*ck] that noise!"

She ended the message by saying she would continue to work on her health not to change her appearance, but so she would have more time with her partner. Case closed, right? Nope. The trainer responded, "You can accept how you look but you can't be happy with the way you look. You can't lie to yourself."

This was the beginning of a back-and-forth in which the trainer told Young she should be ashamed of her body, and Young refused to feel embarrassed. "I'm telling you I see someone I like but you're not listening. Why aren't you listening? Because you are trying to tell me I look bad because I'm fat," she wrote. In the end, she told him to "get some morals" and called it a day.

Young told Yahoo News that she wasn't offended by his initial offer, but when it continued, she considered the impact his attitude may have on other women. When she posted the exchange on Facebook and Instagram, many comments were supportive. Some thanked her for being an inspiration by standing up for body positivity, while others praised her classy responses. "Props to you Cassie!" wrote one Facebook user.

However, a substantial amount of users commented to say they understood where the man was coming from, or that he is entitled to his opinion (of a total stranger's body). When Young retweeted the Yahoo News article, she added that comments like these are "exactly why we NEED to have these convos."

She has a point. The body positive movement, which encourages people of all kinds to accept their bodies, is often met with derision outside of feminist circles, and body positive bloggers routinely receive messages criticizing their weight. In the eyes of society, bodies that aren't cisgender, thin, and white are simply less-than — just look at how the derision aimed at female celebrities who appear to gain weight.

Young has not named the trainer, nor does she appear to have plans to do so. Wherever he is, perhaps the response to her story will help him understand the impact of his attitude.