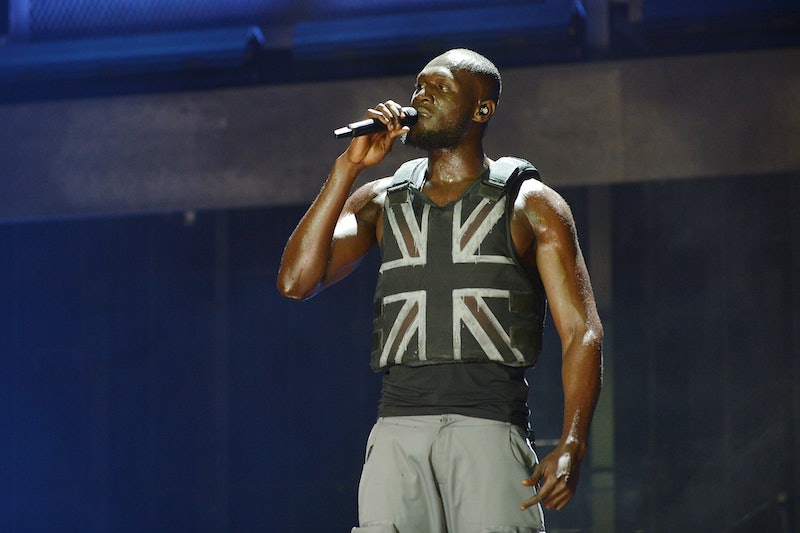 An award-winning grime artist and rapper, a leading political voice, and the curator of #Merky Books, Stormzy is one of the most relevant public figures in the UK (if not the world) right now. The past year has been massive for the star, and news that an image of Stormzy has been placed in the National Portrait Gallery only solidifies that further.

In the image, which now hangs in Room 22 of the National Portrait Gallery among others of noteworthy politicians, artists, royal family members, etc., Stormzy is stood wearing a crown made up of the words HITH or Heavy Is The Head, the name of his new album which will be released on Dec. 13, 2019. He’s looking at the stab proof vest that Banksy designed for the rapper when he headlined Glastonbury in summer 2019. (The vest featured in an art installation in Croydon in October 2019.)

The image was created by Mark Mattock. Posting pictures of it on his Instagram, Stormzy said, "The album artwork for Heavy Is The Head has been hung up in the National Portrait Gallery. Thank you to the @nationalportraitgallery it’s an honour. Infiltration. #HITH.” It’ll be on display for the public to see from Dec. 4, 2019.

The portrait isn’t the first time that images of Stormzy have featured in the National Portrait Gallery. Back in 2016, Olivia Rose photographed the star in black and white, and the image now lives in Room 29 of the gallery.

Gallery director Nicholas Cullinan has said of the new image:

“We are delighted to exhibit the portrait as a contemporary intervention within our historic galleries, and hope to be able to acquire the work for the gallery’s permanent collection. Stormzy has undoubtedly had a significant influence on British culture today, both through his music and work with minority groups and young people, and we hope our visitors will enjoy the juxtaposition of this new work with historic paintings of influential figures from the Victorian era, from politicians, royalty and radicals to artists, sporting heroes and singers.”

Heavy is the Head is Stormzy’s hotly anticipated album. He’s already had a year of highs in the charts as "Own It" is currently at number three. He worked on "Take Me Back to London" with Ed Sheeran earlier in the year, which spent five weeks at the top of the charts in September. He’s also just announced a world tour to coincide with his album, which will start in Feb 2020 Brussels. He will finish up in Lagos in Oct. 2020.

Speaking to GQ about his string of recent successes, Stormzy said, “Being able to drop a first album and then get to your second and have people still listening with open ears — that’s a blessing.” I can't wait to see what else 2020 holds for the star.