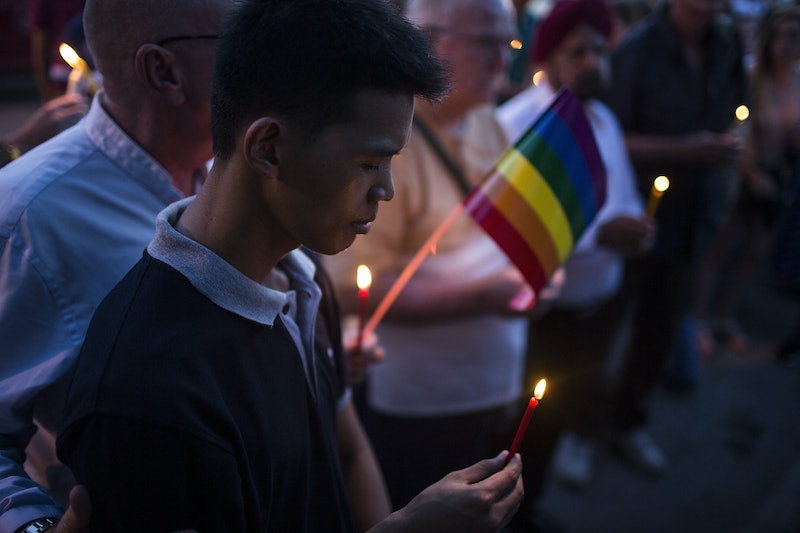 It's been a year since the most lethal mass shooting in America claimed the lives of 49 people. All of the political turmoil that's happened in the interim has delayed change in response to the Pulse shooting, but as the first anniversary of this tragedy approaches, everyone should use this opportunity to recommit themselves to activism that will make a difference. The best way to honor the victims of the Pulse nightclub shooting is to fight for gun control to make sure that a tragedy like this never happens again.

There is a lot to protest in today's political environment, but that can't stop people from staying focused on the biggest issues impacting our society. Gun violence and how to stop it is one of them, and people desperately need to turn their attention back to it.

Pulse was one extremely tragic example of gun violence, but more Americans are killed by gun violence every single day than were killed at the Pulse shooting, according to Everytown For Gun Safety. Although the crisis in the presidential administration seems to be taking up all the air in Washington right now, the American people should get back to the business of making their important opinions known. The 2018 midterm elections are in less than 18 months, and the nation has to let politicians and the rest of the world know that gun control will be a top issue in the next Congress, no matter who is president.

Furthermore, this issue deserves to be viewed through an intersectional lens in order to make sure that reform is as effective as possible. Pulse was an LGBTQ+ nightclub, the event a year ago was a Latin night, and several of the victims were undocumented immigrants. The shooter specifically attacked these already marginalized communities, and they deserve justice that they still haven't received. Everyone should be fighting to protect these socially marginalized communities, and advocating for improved gun control is one of the most powerful and effective ways to do it.

So, if you can, dedicate Monday to remembering the victims and fighting for their legacy. Put a rainbow ribbon in your window or on your car, and use this newly created one that specifically honors LGBTQ+ people of color. Call your elected officials and read them the names of the 49 victims, in the hopes that the weight of their loss inspires some change for the better. Check the Resistance Calendar and see if there are any Pulse memorial events happening in your area. Donate to Everytown for Gun Safety or Gays against Guns, or other organizations that are working at the local and national level to reform gun control on behalf of marginalized communities.

Don't let this anniversary go unmarked, and let it set the tone for your activism for the rest of the year.

Earthshaking political news and mass shootings both happen so frequently these days that it's not entirely surprising that the nation moved on so quickly from the spirit of reform. But to honor the dozens of lives that were lost at Pulse last year, there needs to be a substantive change in American society as soon as possible, to prevent others from dying the way they did.

Americans have to come together and make clear that they won't stand for any more violence. Gun control is inarguably the best method to make sure a tragedy like Pulse never happens again. Honoring the victims means fighting for change.