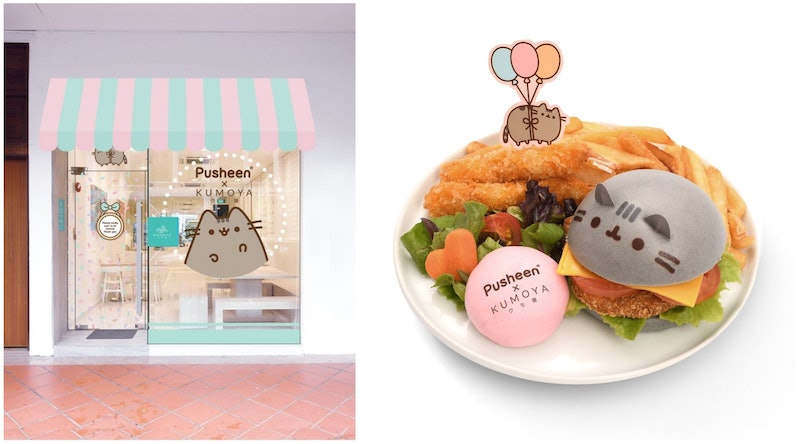 One of the great truths of the internet is that there’s a Pusheen GIF for every occasion — and now, there’s a Pusheen treat for every occasion, too. A Pusheen-themed café is opening up at Kumoya, an eatery on Jalan Klapa in Singapore on Jan. 6, 2019. It will remain open until sometime in March — and, uh, folks? The photos are spectacular. The images we have of the café space itself right now are just artist’s renderings according to Business Insider, so bear that in mind; between Kumoya’s long history of elaborately-themed pop-ups and the fact that the interior for this one was designed by Pusheen creator Claire Belton herself, though, it’s almost certain that the reality will meet expectations when the place finally opens. And the images of the food are truly astonishing — and, in fact, might actually be too cute to eat.

Pusheen first arrived on the internet in the spring of 2010 as the subject of a short, six-panel comic drawn by artist Claire Belton and published at Everyday Cute, a website run by Belton and Andrew Duff. The comic was simply titled “Pusheen Things” and depicted Pusheen… well, doing things. (Hence, “Pusheen Things.”) Pusheen herself was based off of Belton’s actual cat; then 13, Pusheen had been adopted by Belton and her family from a shelter, according to the now-archived Everyday Cute “About” page. For the curious, “Pusheen” is a phonetic spelling of the Irish Gaelic word “puisín,” which means “kitten.”

A site dedicated specifically to Pusheen launched in 2011, and from there, the little illustrated cat really began to take off. She starred in a series of comics and GIFS; merch came along, including plushies made by the toy company Gund; Belton published a book of Pusheen comics in 2013; a Pusheen sticker collection hit Facebook; and on, and on, and on. These days, it’s hard to go a day on the internet without encountering Pusheen in some form. And honestly? I’m not mad about it. Pusheen always make me laugh, without fail. And I know I’m not the only one.

This is why I am totally behind the idea of a somewhat gimmicky Pusheen café — and to be fair, if anyone could pull off something like this, it’s Kumoya. The Singapore café is well known for its pop culture-themed pop-ups. Its current project is a My Little Pony: Friendship Is Magic-inspired eatery, which opened in September and will run until the end of December; previously, though, Kumoya has tackled everything from throwback favorites like the Care Bears and the Little Misses and Mr. Men books to modern fads like the Tokidoki brand.

Each of these themed experiences were notable both for the environment they created and the food available — which, by the way, isn’t just cute-looking. According to Nylon’s review of the Little Misses and Mr. Men café, everything is usually pretty tasty, which the outlet cited as somewhat unusual. “We’ve eaten at plenty of themed cafes, and we can safely say that most themed cafes are overpriced for the mediocre dishes that we are being served,” wrote Michelle Ng. This wasn’t the case here, though; of particular note, said Ng, were the Mr. Bump Knock Out Nasi Lemak, the Little Miss Tiny Sweet and Sour Tempura Fish Burger, and most of the desserts and drinks.

For the Pusheen café, food artist Shirley Wong, aka Little Miss Bento, designed the eats and sweets that will be available — which isn’t exactly surprising, as Wong has worked with Kumoya in the past. (The My Little Pony café also features her designs, for example.) This time round, Business Insider reports, options include a truffle aglio olio pasta dish, a sleeping Pusheen made of charcoal rice and served with beetroot cream sauce and fried chicken, Pusheen-adorned steamed buns, and a shrimp burger with a bun designed to look like Pusheen. Tons of heart-stoppingly gorgeous desserts are also on the menu, as are a number of spectacular-looking drinks. Peach soda served with lychee jelly and finished off with a cloud of fluffy cotton candy? Uh, yes please.

According to Wong’s Instagram page, Kumoya’s Pusheen café will open on Jan. 6, 2019. Hours will be from noon to 9:30 p.m. Tuesdays through Thursdays and noon to 10 p.m. on Fridays and Saturdays. You won’t be able to make reservations, and you’d probably best be prepared for long lines, so plan on getting there early if you want to go. Prices for dishes will run from about $9.90 to $23.90 — and Pusheen merch will be available, too, of course. You’ve got until March to check it out, after which Kumoya will move onto the next big thing.

If you go, please send pictures!