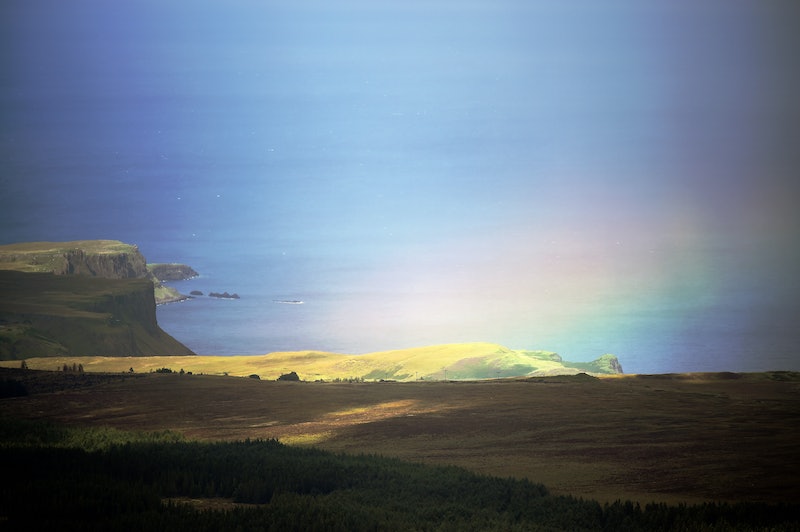 Forget the Babadook. A new LGBT icon has emerged whose very existence is a gay pride parade float. Scientists have uncovered the tiny, duck-sized fossil of a "rainbow" dinosaur in northeastern China, complete with feathers so well-preserved they were able to infer their iridescent color. I'm no paleontologist, but it seems to me that if discos had been around 161 million years ago, Caihong juji would have been a regular on the dance floor every Saturday night.

When their fossils were first discovered during the 19th century, dinosaurs were seen as gigantic reptilian monsters — Godzillas who walked the earth long before Tokyo existed. While some species were as gigantic (and terrifying) as their reputation suggests, scientists now think that species varied in size, from behemoths like the Argentinosaurus to the turkey-sized Compsognathus. And despite what you might assume from movies like Jurassic Park, many dinosaurs weren't scaly. Instead, they were covered in colorful feathers.

That brings us back to C. juji. Initially discovered by a farmer in China's Hebei Province, the fossil was acquired by the Paleontological Museum of Liaoning in 2014. Normally, soft tissue like feathers and skin decay and disappear over time, leaving fossilized bones behind, but the C. juji fossil was so well-preserved that scientists led by Shenyang Normal University were able to analyze its feathers under a powerful scanning electron microscope (SEM). "The preservation of this dinosaur is incredible, we were really excited when we realized the level of detail we were able to see on the feathers," said study author Chad Eliason, according to Science Daily.

In a study published in Nature Communications, an international team of scientists described what they found when they analyzed the fossil. Thanks to the SEM, they were able to see the imprints of melanosomes, the parts of cells that contain pigment. While the pigments themselves had vanished, enough of the melanosomes existed for scientists to be able to tell what color the dinosaur's feathers were.

As it turns out, C. juji was as psychedelic as it gets. Based on the shape of the melanosomes, its feathers were rainbow-colored and iridescent like a hummingbird's. According to Atlas Obscura, its face was blue and green, with orange bands highlighting its wings and huge fan tail. It also had a bony crest above its eyes, which are common in older dinosaurs but not often seen in those with feathers. (Its name literally translates from Mandarin to "rainbow with the big crest.") Eliason told the Los Angeles Times that taken together, the ridge and feathers suggested that this dinosaur was an "important animal" in evolution.

If you're thinking C. juji sounds a lot like a bird, you're not wrong. Most experts agree that modern birds descended from theropods, a group of two-legged dinosaurs that includes velociraptors and the Tyrannosaurus Rex. In fact, many believe that birds are theropods, albeit much smaller than their extinct fellows. According to current evidence, theropods shrank over the course of just 10 million years, which sounds like a long time until you remember that evolutionary time moves at a glacial pace.

Until recently, paleontologists could find just a single link between gigantic theropods and modern birds: Archaeopteryx. But with the discovery of C. juji, scientists may be able to get more insight into how theropods went from fearsome T. rexes to... well, this.

"This discovery gives us insight into the tempo of how fast these features were evolving," Eliason said, according to Science Daily.

Movies aren't exactly known for fact-checking their science fiction, but I can't be the only one who thinks that C. juji would make a fabulous addition to the next blockbuster dinosaur movie. Hollywood, are you listening?