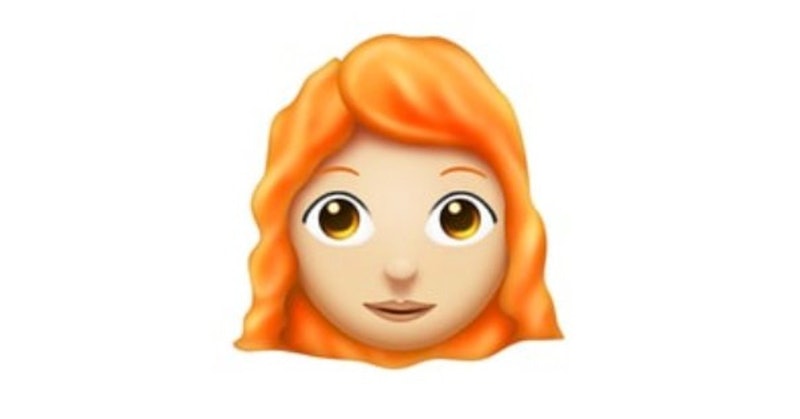 Less than two percent of the population has red hair, which seems weird because I know so many amazing redheads. As a result, redheads don't have their own emoji, which seems pretty unfair — but luckily, that may be about to change. It was announced on Twitter that a redhead emoji may be slated for release in June 2018. The blog How To Be A Redhead tweeted the news that the new redhead emojis should be here in less than a year. A press release from the Emoji Subcommittee at Unicode (yes, this is a real thing) confirmed that the redhead emoji is on the schedule, though it does still need to be approved at the subcommittee's fourth-quarter meeting.

It seems like redheads have waited far too long to finally be recognized in this universal way, especially considering all of the special things about redheads, like their ability to make their own vitamin D. Can anyone else do that? In a January post, How To Be A Redhead wrote, "The lack of a redhead emoji has been the most frequent complaint from Emojipedia users in the past three months (go redheads!). With one to two per cent of the population born with red hair, that means as many as 138,000,000 iPhones are crying out for a ginger-inclusive update. That’s a lot of people! ... These days, emojis are the only way to describe your feelings, and a whole demographic of people are missing out."

The FOMO experienced by redheads was so prevalent that some people in Scotland even started a petition for their right to be represented through their own emoji. In Scotland, Ireland and Wales, redheads make up 10 percent of the population, Telegraph reported, and the lack of emoji excludes a large number of the population from being able to express themselves digitally.

"Apple already has six different skin tones, and over a dozen hair styles for its characters but has faced criticism on social media for not introducing a redhead," Jamie Johnson wrote.

Let's hope the wait is almost over for these people who are also more likely to be left handed, and never go grey.