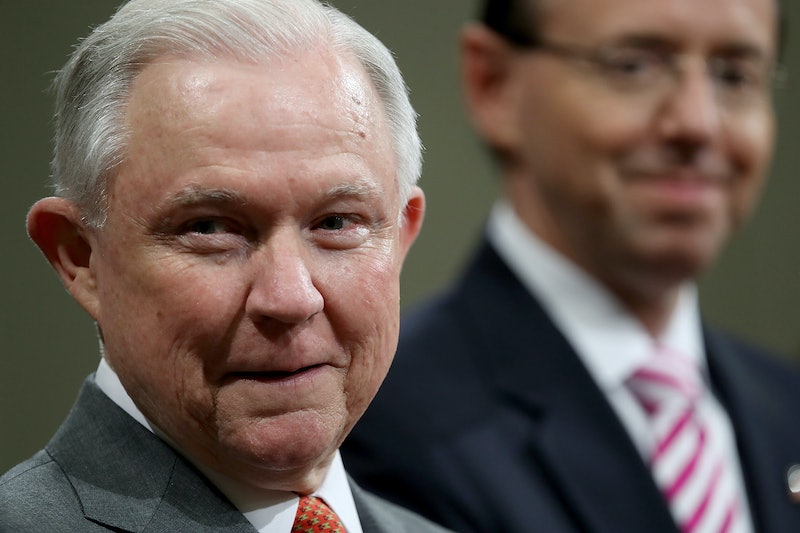 The U.S. attorney general has renewed his focus on Americans' religious rights. On Monday, Jeff Sessions announced a “Religious Liberty Task Force” aimed at making the country more hospitable to religious organizations. "You have to practice what you preach," he said at a press conference announcing the new group.

Sessions' task force will aim to ensure the Justice Department is upholding the executive order President Trump issued in May 2017 ordering the executive branch to protect religious freedoms. It will do so "in the cases they bring and defend, the arguments they make in court, the policies and regulations they adopt, and how we conduct our operations,” according to the attorney general.

This will include making sure Justice Department employees "know their duties to accommodate people of faith," Sessions said at the press conference, as well as continuing conversations with religious groups across America "to ensure that their rights are being protected."

The executive order that led to the creation of the task force states that "it shall be the policy of the executive branch to vigorously enforce Federal law’s robust protections for religious freedom," as well as "respect and protect the freedom of persons and organizations to engage in religious and political speech."

Sessions issued a new religious liberty guidance in October that acted as a predecessor to this task force that said the freedom to exercise your chosen religion "includes the right to act or abstain from action in accordance with one’s religious beliefs."

Sessions added on Monday that “religious Americans are no longer an afterthought" under the Trump administration. “In short, we have not only the freedom to worship — but the right to exercise our faith," he said. "The Constitution’s protections don’t end at the parish parking lot nor can our freedoms be confined to our basements."

The American Civil Liberties Union (ACLU) responded to the announcement on Twitter with a reminder for the Justice Department:

"Reminder: Religious freedom protects our right to our beliefs, not a right to harm others. The Department of Justice has no business licensing discrimination against LGBT people, women, and religious minorities."

Protecting religious liberties have been a consistent platform for the Trump administration, including siding with the baker who refused to serve a same-sex couple and religious organizations that refused to provide their employees with insurance coverage for birth control.