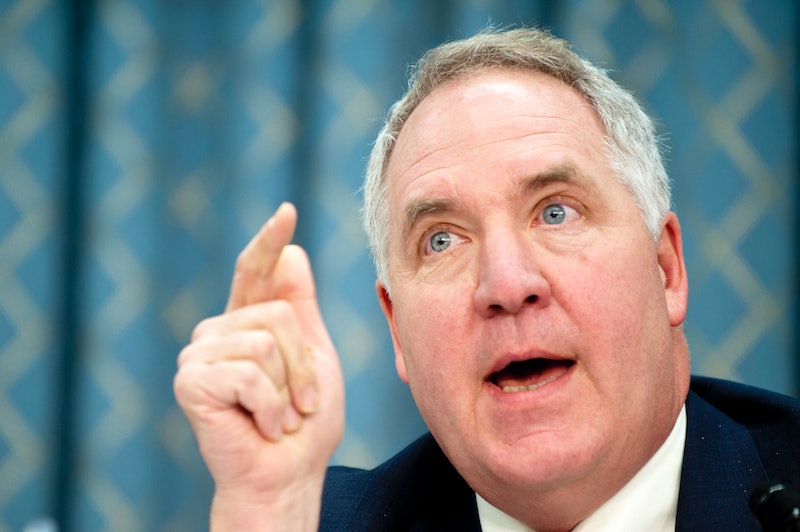 The Republican war on Obamacare has revealed a lot of ugly secrets about the American health care industry, including a pervasive and egocentric attitude toward who should bear the burden of coverage. This week, Rep. John Shimkus of Illinois actually tried to argue that men shouldn't be responsible for covering prenatal insurance costs, a laughable notion to anyone with a basic understanding of how the insurance industry works.

This assertion isn't just about maternity costs, but the entire American mindset about collective funding for health care. Shimkus' argument is proof of why the U.S. needs to fundamentally rethink its approach to health care, because the nation can never progress if its interests are so individually based.

The exchange happened during a hearing of the House Energy and Commerce Committee on Thursday regarding the new Obamacare replacement bill. Democratic Rep. Michael Doyle of Pennsylvania asked his Republican colleagues to explain specifically which mandates in Obamacare they took issue with, leading to Shimkus' infamous remark. "What about men having to purchase prenatal care?" Shimkus replied. "Is that not correct? And should they?"

First of all, as Doyle pointed out to Shimkus, the idea that an individual can go into the insurance marketplace and negotiate a plan that covers only the specific services they need is ridiculous. Insurance only works because people pay for things they don't need, which therefore covers the people who do need them. It is correct that under Obamacare, men have to pay for prenatal health care coverage, but that's only a problem if you think that men have no vested interest in making sure all babies are born in well-funded hospitals and cared for by properly trained physicians. Maternity care costs more than what women alone pay for it in the insurance marketplace, which is perfectly appropriate because the healthiness of the children born into this country is a matter of everyone's concern.

Even if that kind of pick-and-choose coverage did exist, men, and particularly Republicans, should be ecstatic to pay for prenatal coverage. Of course they don't physically birth the children, but men are still the number one leading cause of pregnancy and should be happy to contribute to the health and well-being of mothers and babies.

Plus, the "pro-life" designation falls through if you've already abandoned the child's needs just after the mother can no longer get an abortion (guess who got a 0 percent rating by NARAL, by the way — Shimkus). The whole conservative argument against abortion is that everyone deserves a shot at life, but that only stands if every child gets as equal a shot as possible. Denying care to unborn children isn't giving them a fair shot, and Shimkus' suggestion will continue to disadvantage those marginalized people who are already struggling against systemic injustice.

Americans have always valued the ability to pull yourself up by your bootstraps, but that individualistic attitude isn't serving society very well anymore. This is now a country where the top 50 percent of the population holds 99 percent of all the wealth, which means the people at the top have the moral obligation to support those who do not have the means to support themselves. The national identity of the United States is suffering because for too long, individual responsibility has been defined as covering your own needs and leaving others to do the same. But the social structures that accumulate disadvantage for marginalized people have created an economy that no longer makes that possible. A cultural restructuring towards collectivism is the country's only option, because the United States is rapidly losing its credibility as a place where anyone can make it.

If you love this country, then you have to love and support the people who comprise it, including the poor and the sick. If you have more than you need, you should want to give to those who have less. Americans have the responsibility to look out for each other, and quality, affordable health care is one of the best ways to do it.