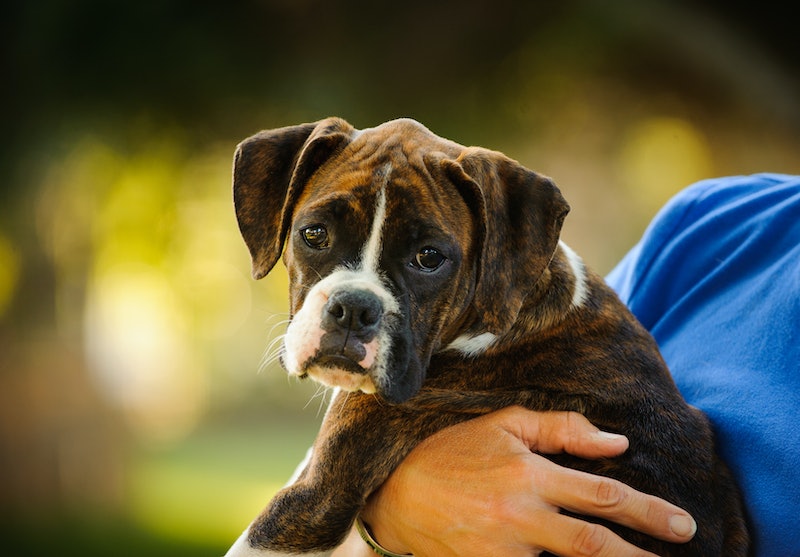 I was at an airport not long ago where I was bomb-sniffed by an adorable TSA dog. It was five in the morning and the security line was interminable, but this sweet creature was a delight to watch. He would wag his tail happily at all the travelers, jump around, and roll over on his back — all to the chagrin of his human handler, I imagine. That wonderful canine's temperament was probably ill-suited to his burgeoning bomb-sniffing career, as is the case with an adorable rescue dog who was returned to a shelter because her owner thought she was "too nice."

Indeed, as Fox News reports, Boxer mix Helena was recently adopted from an Atlanta-area outpost of the LifeLine Animal Shelter. Unfortunately, Helena's cuddly, person-friendly personality wasn't quite what her new owners expected, and Helena was swiftly returned. "Introducing....the sweetest, nicest, snuggliest dog in the ATL. Helena was recently returned to our Fulton County Animal Services location after her new owners said she was too nice and just wanted to be around them all the time," LifeLine posted on Facebook this week. "This Velcro dog sounds just about perfect to us. And we know there’s a family out there waiting to spend their nights binge-watching Netflix and snuggling with this sweet velvet hippo."

Though it's not super uncommon to hear of sad cases in which new dog parents have to return a pet that's too aggressive (though it's best to employ behavior therapy first, if possible), it's much rarer to hear of someone returned a dog that's too lovely, and Helena's story quickly went viral, with pet enthusiasts rightfully enraged that someone could reject such a sweet creature. Lifeline's page was flooded with dog lovers claiming Helena's first owners didn't deserve to adopt a dog, if they were willing to bring it right back.

"For Pete's Sake! This is typical shelter dog behavior. Instead of being "bothered" by this they should be flattered that their new dog has developed such a connection with them.After a bit, this intensity will decrease. Your brand new dog needs some reassurance not a return trip to the shelter!" one person posted. Another wrote, "Those humans didn’t deserve her. We love our Velcro dog and if she wasn’t reactive, we’d bring home Helena as a buddy for her."

Though it is understandably difficult to comprehend what would lead adoptive dog parents to send such an apparently sweet doggie back to a shelter — albeit a no-kill one — Lifeline says the mishap was due to a misunderstanding between them and the owners. Since Boxers tend to make good guard dogs for families, the people who initially adopted Helena thought she'd be a little more aggressive.

"The owners were looking for a more independent dog; and Helena just isn’t that," Lifeline posted on Facebook, in response to a concerned post about her temperament. "There are also common misconceptions that dogs that look like Helena are protectors or guardians of the home and she isn’t that either. She’s pure love and looking for a bestie."

Indeed, so-called "Velcro dogs" tend to be clingy, which works for some dog owners, but won't necessarily fly if you need a tougher, more independent pet. If you're adopting a shelter dog, it's important to communicate with the shelter volunteers to ensure your prospective pet's personality meshes with yours—re-homing or re-sheltering a dog can be traumatic, both for the pet and for you, so it's best to avoid any complications.

Meanwhile, Helena got a happy ending:

I hope she's smothered with love and kisses in her brand new family!

More like this
The Guide To “Witches Stairs” & Why They’re Actually Great For Small Spaces
By Emma Garza
How To Take A .5 Selfie On An iPhone
By Emma Carey
YouTuber Runs Into Margaret Sanger’s Grandson While Filming
By Alexis Morillo
What Is A “Softboy?” The TikTok Term & Aesthetic, Explained
By Courtney Young
Get Even More From Bustle — Sign Up For The Newsletter