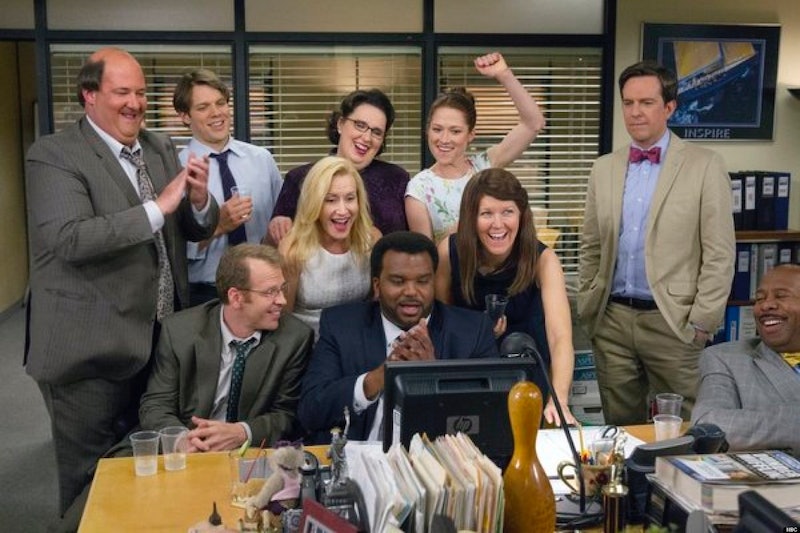 Ready for some big-time watercooler news? On Dec. 18, TVLine reported that NBC is reportedly developing a revival of The Office for the 2018-2019 TV season. NBC had no comment for Bustle regarding the news of the revival series. According to TVLine, the revival series would be set at paper sales company Dunder-Mifflin's Scranton, Pennsylvania, branch, just like the U.S. version of the series, which aired on NBC from 2005 until 2013. TVLine also reported that the cast would include a mix of old and new cast members, but Steve Carrell would not be reprising his role as regional manager Michael Scott. NBC is reportedly searching for an actor to take on that managerial role in the show, according to TVLine.

If the news is true, it shouldn't be too surprising. Back in August, NBC Entertainment chairman Bob Greenblatt told Deadline that a revival of The Office was on his wishlist of shows for the network. “We often talk about The Office, I’ve talked to Greg [Daniels] four times over the past few years. It’s always, ‘maybe some day but not now’,” Greenblatt told Deadline during the Television Critics Association Summer press tour. “There is certainly an open invitation but we don’t have anything happening right now. If he wants to do it, I would do it.” Other shows on Greenblatt's revival wishlist included 30 Rock, The West Wing, and ER, according to Deadline.

NBC just successfully launched a revival of the 2000s sitcom Will & Grace, which recently earned several 2018 Golden Globe nominations, including Best Comedy TV Series. And now it looks like The Office could be next. The Office is one of the most beloved sitcoms of 2000s and it was based on an equally loved British original, which aired on BBC Two in 2001 and 2002, along with a two-part Christmas special in 2003. Both series centered around the quirky characters who worked at a paper sales company and the adventures they had together as co-workers — but it was never just another day at the office for them. The characters were so endearing, beloved, and so quotable.

A revival of The Office on NBC could mean the new series just might provide updates on our favorite characters from the old series, as well as introduce brand new co-workers to the world. Perhaps Pam is a famous painter now. Maybe Andy Bernard (Ed Helms) is president of Cornell University by now. We could see how Oscar is doing in his political career and if Jim is still working at Athleap in Texas. We could see what Dwight and Angela's kids are like and what Kelly and Ryan are up to. Who would win the 2018 (or 2019) Dundies? The possibilities are endless — that is, if the revival is actually happening.

But, it is a strong possibility. In addition to Will & Grace, several '90s and 2000s classic shows have had successful revival series, including Netflix's Fuller House, Netflix's Gilmore Girls: A Year in the Life, Showtime's Twin Peaks, Fox's The X-Files, and many others.

So if The Office revival is actually happening, the sitcom would be in good company and fans would likely clock in just to check out what their favorite characters are up to in the new series. For now, though, the news is not confirmed and merely on the wishlist of Greenblatt and many fans.