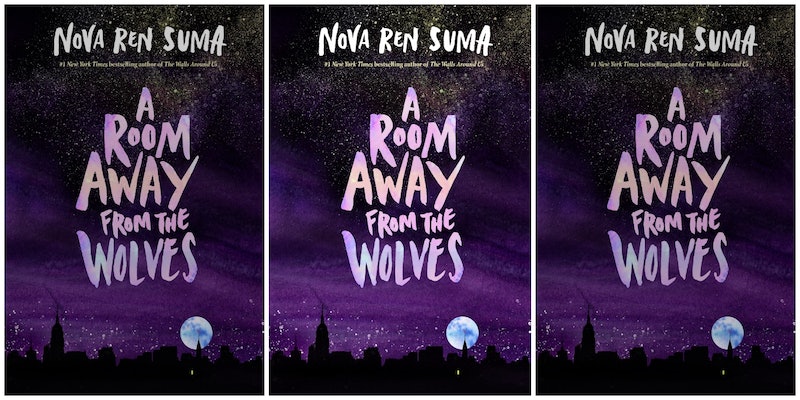 If you're searching for a YA thriller with Shirley Jackson vibes, the search stops here: Nova Ren Suma's new novel A Room Away from the Wolves is coming out later this year, and it sounds delightfully eerie. The author of The Walls Between Us is known for her twisted, terrifying YA novels, and her latest sounds like it just might keep you up all night long. Bustle has an exclusive peek at the cover (designed by Sarah Coleman) and an excerpt of the novel below.

Along with her mother, Sabina escaped her abusive father as a child. But when her mother settles down with a man and his two daughters, it pulls on the seams of their precarious relationship. Ten years after their escape, Sabina is 17 and alone, after being kicked out of her stepfather's house. In search of refuge, she heads to New York City and secures a room at Catherine House, an all-girls boarding house in Greenwich Village. But she quickly discovers that something isn't quite right about the house... or anyone who lives there. But is there a sinister underbelly to Catherine House — or has Sabina been lying to everyone around her?

A Room Away from the Wolves is available for pre-order now and will be available in stores nationwide on Sept. 4, 2018, but you can start reading an excerpt of the novel right now:

A Room Away from the Wolves by Nova Ren Suma, $12, Amazon

Excerpt: In the Dark

When the girl who lived in the room below mine disappeared into the darkness, she gave no warning, she showed no twitch of fear. She had her back to me, but I sensed her eyes were open, the city skyline bristling with attention, five stories above the street. It was how I imagined Catherine de Barra herself once stood at this edge almost a hundred years ago, when the smog was suffocating and the lights much more dim, when only one girl ever slept inside these walls of stacked red brick.

"When the girl who lived in the room below mine disappeared into the darkness, she gave no warning, she showed no twitch of fear."

I was with my friend, if she could be called a friend, on the rooftop that night, close enough to pull her away or slip a word into her ear, close enough to push. I saw how far the gate was, how long the jump would be to reach it. I was there to witness how she flew.

It was dark, and I blamed the darkness. For those few moments, when she was midair and not even kicking, I practically became her. I grew her long legs and longer eyelashes, I lost the jumble of knots in my hair, I let the mistakes spill out of my suitcase and scatter without a care into the wind. I was falling, and falling fast. There was a hum in my ears like a song leaking through floorboards. The windows on the way down were all lit up, every one, people I didn’t know living their private lives inside as if no one could see. The skyline above sparkled the way stars used to at home, and I didn’t want to ever hit ground. I was someone here. I was someone.

"For those few moments, when she was midair and not even kicking, I practically became her."

Maybe that was what she saw, what she felt, what this house turned her into. She was out there beyond the ledge with nothing beneath her feet. She was high enough to clear the gate many times over. I swore she was out there. I swore the air had her, the night had her, the lights cast a ring all around her, and then the patch of darkness was empty.

I could see past where she’d been, as if I were sailing straight over buildings, beyond spires and scaffolding, past roof gardens and water towers, down through Lower Manhattan to the southern tip of the island, where the gleaming black bay took over. I saw the whole city spread out before me, sinister and strange and perfect. The air was clear, and she wasn’t in it. No girl was falling or flying. Every window was dark. And how oddly quiet it became, like a patch of forest where no person had set foot for what felt like days upon days.

"I saw the whole city spread out before me, sinister and strange and perfect."

When I remembered where I was, I crept closer to the edge, gripping the bricks to stay steady, and I did what I knew she wanted.

I leaned out into the vacant night—the air boundless, feathery gray, and blooming with possibility—and I looked down.

More like this
These 25 International Horror Movies On Netflix Prove Fear Is A Universal Language
By Bustle Editors
Read The First Pages Of Emma Rosenblum’s Highly Anticipated Debut, 'Bad Summer People'
By Samantha Leach
What Joyce Carol Oates Knows About Fame
By Erin Somers
10 Must-Read New Books Out This Week
By K.W. Colyard
Get Even More From Bustle — Sign Up For The Newsletter