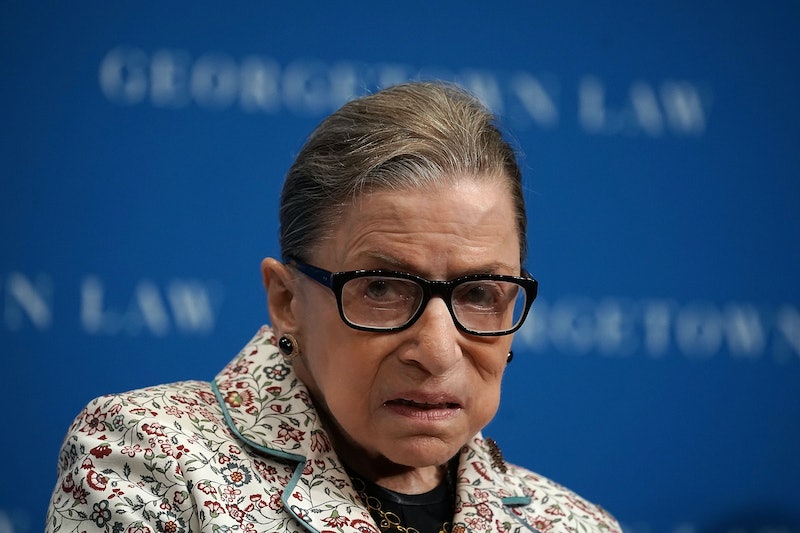 The Notorious RBG's tenure on the Supreme Court has been groundbreaking in many ways, including the fact that she was the first Jewish woman to join the bench. This week, a Ruth Bader Ginsburg poster was vandalized with anti-Semitic graffiti in a New York City subway station, and the authorities are investigating it as a hate crime.

The vandalism appeared on an advertisement for a 2018 book about the justice, The Unstoppable Ruth Bader Ginsburg: American Icon. Scrawled on her face were the words, "Die, Jew b*tch," with a swastika covering her mouth. Local transit officials said the vandalism — which took place at the Nassau Avenue subway station in northern Brooklyn — was reported on Tuesday and has since been removed.

The New York Police Department tweeted on Wednesday that both its transit division and hate crimes task force were "looking into this incident." The post added that "there is no room for hate in NYC."

Ginsburg wasn't the first Jewish justice when she joined the court in 1993. Louis Brandeis became the first in 1916, and there have been many others since then, including current justices Stephen Breyer and Elena Kagan. But Ginsburg has served longer than any of them. She cites her Jewish heritage as having shaped her liberal ideology.

"I grew up in the shadow of World War II," Ginsburg told The Forward last year. "And we came to know more and more what was happening to the Jews in Europe. The sense of being an outsider — of being one of the people who had suffered oppression for no sensible reason... It's the sense of being part of a minority. It makes you more empathetic to other people who are not insiders, who are outsiders."

New York City has recently increased focus on anti-Semitic incidents in response to a big uptick in the number of reported occurrences. According to The Jerusalem Post, the city experienced 180 incidents in 2018, which was a 38.6 percent increase from 2016. This correlates to a nationwide trend; per the Anti-Defamation League, instances of anti-Semitic behavior across the country increased by 57 percent between 2016 and 2017. Perhaps the most infamous example was a shooting that took place in a synagogue in Pittsburgh, Pennsylvania in October, killing 11 people in the middle of worshiping. Hate crimes have gone up more broadly, too, and some analysts have blamed President Donald Trump's divisive rhetoric.

Responding to reports about the subway vandalism on Wednesday, New York City Transit Authority tweeted, "We regret that our customers were exposed to this hate speech, and thank you for notifying us."

New York City Mayor Bill de Blasio also tweeted about the incident on Wednesday. "Ruth Bader Ginsburg represents the very best of our city," he wrote. "We'll find whoever is responsible for this anti-Semitic trash and ensure they face consequences for trying to spread hate in New York City. If you have any information on this despicable act, please contact the NYPD."